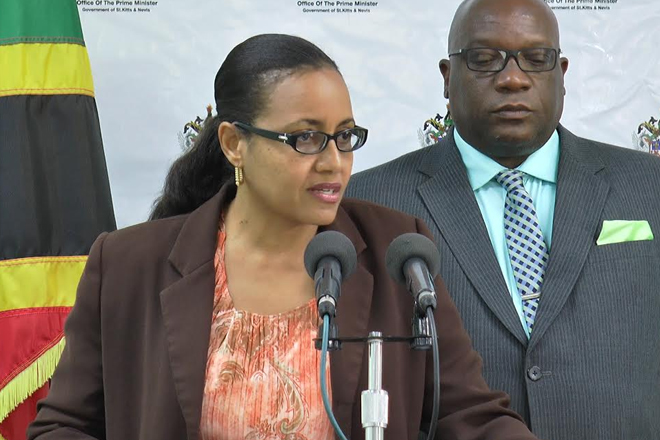 (ZIZ News) — Minister of State with Responsibility for Health, The Hon. Wendy Phipps, has credited the St. Kitts Nevis Bureau of Standards for their swift action in discovering the island purified water contamination concern.

She spoke on the issue at the Prime Minister’s Monthly Press Conference at the Parliamentary Lounge at Government Headquarters on Tuesday.

“It was the Bureau of Standards and Multipurpose Laboratory at La Guerites which is part of the Ministry of International Trade that would have discovered the contamination and carried out their lawful duty in reporting it to the Environmental Health Department of the Ministry of Health and as such, it was the Ministry’s responsibility to speak to the proprietor of the establishment because in this case it is not just simply a matter of him being the supplier of bottled water but he is also the official bottler. We would’ve taken the responsibility in getting him to remove his products from the store shelves and we went a step further by notifying the public”, Minister Phipps stated.

Minister Phipps stated that local bottlers are fully responsible for the sanitation of their plants.

She also suggested that the testing of imported water should also be required.

”What should also be happening on a regular basis is the testing of imported water because we do have a number of imported bottle water into the federation. We have some from as nearby as St. Maarten, St. Vincent, some as far away as France in terms of Evian and some from Trinidad and Tobago like Blue Water and other brands,” she said.

“I think what needs to be done is what is being done. At the same time, there is also a burden of responsibility on all local bottlers to ensure that the plants are fully sanitized”, the Minister of State explained.

On Saturday, the Bureau of Standards issued a warning asking consumers not to drink water distributed by Island Purified Water in the last two weeks as it may result in diarrhoea and illness.

In a statement to the media, Acting Chief Medical Officer, Dr. Cameron Wilkinson confirmed that that brand of water failed tests for Coliform bacteria.

He said since the test results the company has been closed and corrective measures are being taken to ensure the safety of the water produced.