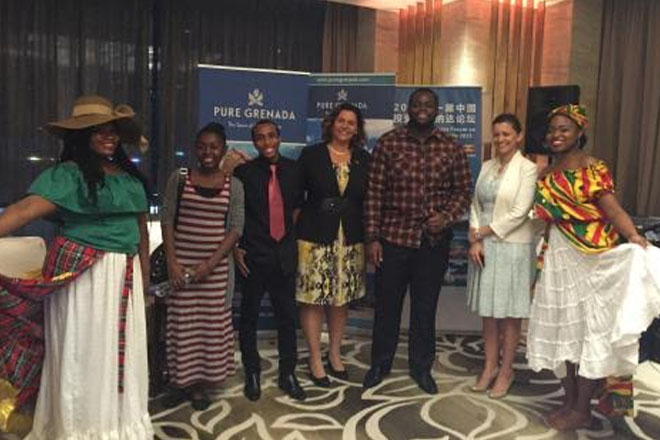 St George’s, Grenada — Alexandra Otway, whose appointment as minister of implementation took effect in December 2014, has been promoting Grenada across the world.

Starting in early July, she travelled with Micha Emmett, managing director of CS Global Partners, to give speeches in London, Zurich, and China – where she headed three events in Shanghai, Ningbo, and Beijing. Each speech highlighted Grenada’s Citizenship by Investment Programme, including its due diligence procedures, the work carried out by the Committee, and the significant benefits that the programme has brought, and will continue to bring to the nation.

In London, the minister joined Prime Minister Dr Timothy Harris of St Kitts and Nevis and Prime Minister Roosevelt Skerrit of Dominica to promote Grenada before more than 200 experts and agents specialising in citizenship by investment at this year’s Citizenship by Investment and International Residence Summit.

Her speech, focusing on the beauty of her tri-island nation as well as its friendly business environment, was followed by a video about life in Grenada.

Otway then visited Zurich, Switzerland’s commercial capital, where she held a VIP breakfast seminar with wealth planning professionals, senior private bankers, legal advisors, and private investors. The audience actively interacted with Otway, who underlined Grenada’s attractiveness as a luxury travel destination, a target for foreign investments, and a vacation option.

China was the crown jewel of the minister’s trip, where she acted as sole government envoy to the First Annual China Forum on Investment in Grenada. The minister’s first stop was a press conference in the city of Shanghai, where national and local media companies interviewed her extensively on both Grenadian culture and the investment options available to interested Chinese entrepreneurs.

On July 13, Otway was interviewed by Ningbo’s most famous local talk show host in a city whose history can be traced to 4800 BC and that once marked the beginning of China’s Maritime Silk Road. The interview will be broadcast to millions of people, and will reinforce the growing friendship between Grenada and China. Attendees were charmed by Grenadian dancers and performers, including Lendon Telesfora on the saxophone, Alex Lett Stafford on the steel drums, and singers Kizzie Rennie and Alana Benjamin. These talented Grenadians are students who have received a scholarship to study in China.

Finally, the minister flew to Beijing, where she was the keynote speaker to over 100 immigration agents, interested investors and friends of Grenada. Otway highlighted the many benefits of Grenada’s citizenship programme and the nation’s rapid development as a centre of finance and investment in the Caribbean, and enchanted delegates with vivid tales of life on the Island of Spice.