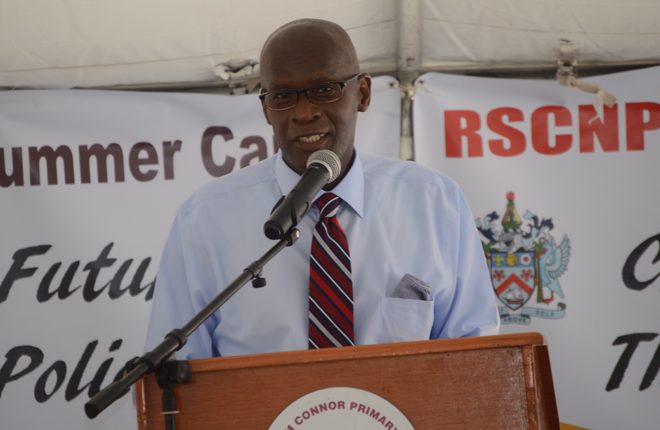 (SKNIS): The Ministry of Education is fully supportive of the Police Summer Youth Camp and is proud to be in partnership with the Royal St. Christopher and Nevis Police Force’s (RSCNPF) initiative, says Permanent Secretary, Vincent Hodge speaking at the opening ceremony of the camp, on August 14, at the Dr. William Connor Primary School.

When the ministry was approached by Constable Lauston Percival, who has taken the lead in this initiative, the ministry readily agreed that it would come on board, said the permanent secretary, adding that the ministry made the Dr. William Connor Primary School available for the camp and also partnered with it in terms of the lunch programme.

Mr. Hodge commended the RSCNPF and the Deputy Commissioner of Police, Hilroy Brandy,
for the work that the police officers do in the Federation.

“I look back on many scores of years and think of how the police officers used to operate then,” he recalled. “There were persons who lived amongst us in communities. They lived in the police stations in the barracks, but they were very much integrated within the life of the community. They attended community churches. They belonged to community groups including sport groups like cricket clubs and football teams. They visited schools. They were always frequently seen on the streets and for me that is a great part of community policing where the police officers are very much integrated into the life of the community.”

…Today that has somewhat changed and I think that from what we are hearing and seeing that it is coming back again. There are deliberate attempts to reintegrate police officers into the life of the community. That is a welcomed phenomenon that we would like to see continued.”

The permanent secretary emphasized that a police officer’s duty is to protect and serve. He added that police officers are tasked to ensure that community members benefit from their service of protection; to help citizens to respect the law and to keep the laws.

“So, yes part of their responsibility would be to enforce the laws that we talk about,” he said. “When citizens break those laws it is the responsibility of the police to help them to correct those mistakes and to prevent them from breaking the laws in the future.”

Addressing the 200 children participating in the camp, Mr. Hodge told them that they should not view the police as their enemies, but rather their friends. That is why they go to the extent to organize camps such as these.

At the beginning of the school year, the Ministry of Education plans to partner again with the RSCNPF to unfold a new programme.

“We have three officers, one of whom is Officer Percival, who will be termed ‘resource officers’, and will be working with our secondary schools to rollout a programme called Teen and Police Service (TAPS). I’ve had a chance to listen to the three officers present the role that they will be playing in our secondary schools and the Ministry of Education is excited about that new initiative. Again, it’s going to make the presence of our police officers more visible in our schools and in our communities on a good note,” said Mr. Hodge.