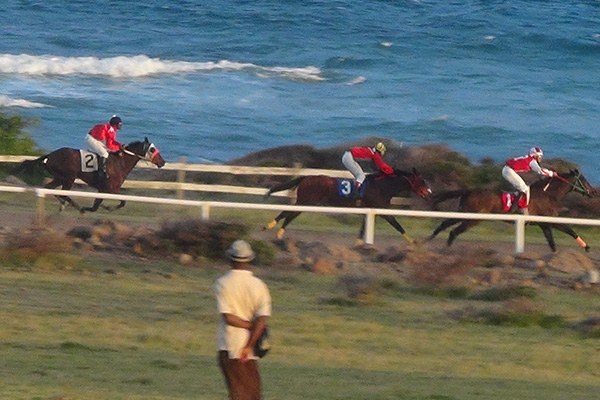 Mr. Big Pepe ends the year on a high

It was Sunday 29th December and the action was AAT THE Indian castle race track. It was effectively, the final race meet to be hosted by the Nevis Turf and Jockey Club for 2013.

It was the penultimate race of the day and there was an unmistakable buzz in the sizeable crowd.

It was going to be yet another showdown between MR. BIG PEPE and the rest.

Even the Jockeys seemed tense and nervous and it was obvious that each one wanted to get a jump start on the others and this resulted in a couple of false starts.

The crowd was getting restless and it was also affecting the horses as they paraded for what seemed like an eternity.

Eventually they all bolted out of the blocks and the crowd was immediately alert.

WILD CANDY held its own for the first part of the race but Brem Liburd aboard MR. BIG PEPE,  held him close.

On the final leg, as they sprinted towards the finish line, it could have been anybody’s race. The patrons were screaming to the top of their lungs.

MR. BIG PEPE held his own and managed to edge out WILD CANDY by a head.

There were four races on the card.  Here is a summary of the races held:

The next meet is scheduled for Sunday 5th January 2013