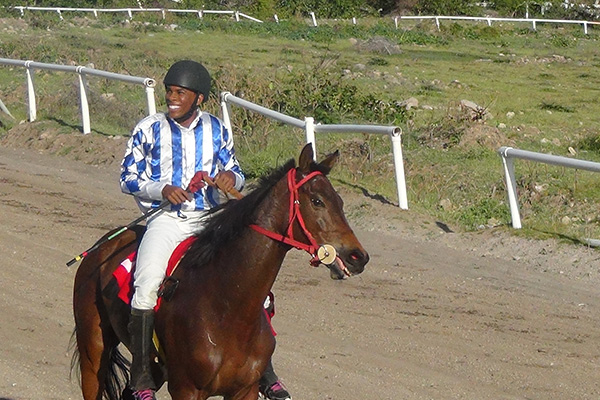 Sports Page — President of the Nevis Turf and Jockey Club, Allister Thompson confirmed on Wednesday 9th July that the popular and dynamic horse known in the local Horse racing circles as MR.BIG PEPE, has died.

As a matter of fact, the treasured horse, passed away since Thursday 3rd July but Thompson who is part of the training team for the horse noted that owner Delroy Liburd and his Mom June had taken the loss really hard and so not much was said at the time.

MR. BIG PEPE was always the horse to beat in recent meets. As a matter of fact, in the 17 races in which he competed at the Indian Castle Race track, he won all of 14 of those races and lost just 3.

According to Thompson, there was no grand ceremony as has been the case when other long serving animals die.

The horse was buried at Low Ground Estate, with close members of the owner’s family and stable personnel present.

Thompson indicated that the horse developed some problems on Wednesday 2nd July and was visited by The VET early the following day.

It was concluded that it was suffering from some sort of stomach ailment, specifically ACID REFLUX.

The horse passed away later that same day.

Horse racing fans across the island and visitors who have witnessed the horse at its ultimate best, would sorely miss the rare treat of seeing the horse literally flying around the track, skillfully guided by veteran Jockey, Brem Liburd.