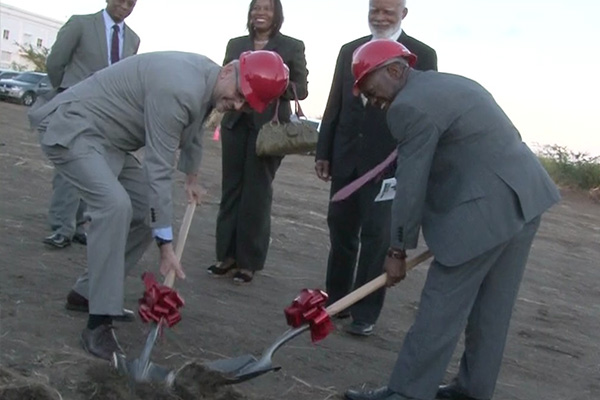 Basseterre, St. Kitts (SKNIS): The standard of recruitment and training for law enforcement in St. Kitts and Nevis is expected to rise significantly when a new multipurpose training center for the security forces is completed in 2015.

On Tuesday (January 14), Prime Minister the Right Honourable Dr. Denzil Douglas was joined by His Excellency Mikael Barfod, Head of the Delegation of the European Union to Barbados and the Eastern Caribbean in turning the sod at a ground breaking ceremony to symbolically mark the start of construction for the 38,741 square foot facility.

Interior Designer/Planner Arlene Edwards of Williams Architecture indicated that key components of the two story building will include a conference room that can accommodate 90 persons, two computer rooms catering to 64 persons, a library, classrooms, dining room, kitchen, and a number of private offices on the lower level. The top level will feature dormitories for 80 males and 24 females, laundry room, multipurpose room, gymnasium and indoor basketball court. Elevators and ramps will allow easy access for persons with special needs.

On the outside a parade square will facilitate drills and practical exercises and bleachers will be mounted to provide seating for persons attending public events. The roof of the center is designed to accommodate solar panels and store water from rainfall in keeping with the country’s renewable energy focus.

Prime Minister Douglas described the ground breaking at Lime Kiln as “a very special day,” as the idea of the training center is progressing towards reality.

“The center that will emerge on this site will be key to the training and continued professionalization of our nation’s law enforcement personnel with intergenerational benefits to our nation,” he stated. “Indeed, it will serve as a focal point for law enforcement training throughout the entire region thereby enabling St. Kitts and Nevis to make yet again a meaningful and substantive contribution to the safety and stability of the region as a whole.”

As the holder of the ministerial portfolio for Police and Defence Force, Prime Minister Douglas informed the gathering that in addition to the improvement of security facilities around the island, there will also be continuous upgrade of the curriculum at the Police Training School, improved recruitment practices, enhanced staffing policies and improved working conditions to attract high performing graduates to law enforcement.

Ambassador Barfod spoke highly of the relationship that the European Union has with the Federation and congratulated the government for its vision.

“Citizen security is key for economic and social development and the Government of St. Kitts and Nevis should be commended for its efforts and progress in this matter,” he noted. “…  we are very encouraged by the decision of the government to co-fund the facility with EC S1.9 million. This shows true commitment and ownership and also a sign of the solidarity with sub-regional partners who may also benefit from the facility.”

He revealed that the EU’s contribution is EC $10.8 million.

His Excellency Barfod added that “the Caribbean region faces many security challenges such as domestic abuse and violence, illegal drugs trafficking and gang violence. St. Kitts and Nevis will hopefully be better prepared to present and mitigate these issues when this training center is up and running.”

The visiting diplomat likened the center to a seed, explaining that it has to be nurtured, managed and protected in order to reach its full potential.

Agencies including the Royal St. Christopher and Nevis Police Force, St. Kitts-Nevis Defence Force, the Fire and Rescue Services, Her Majesty’s Customs and Excise Department as well as Her Majesty’s Prison will have access to this facility when completed.