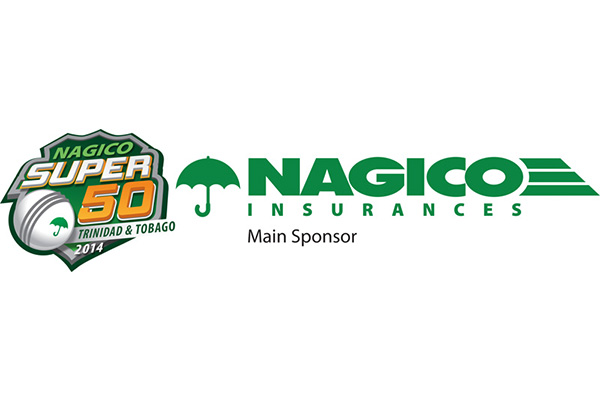 NAGICO Insurances signs on as new sponsor of Regional Super50

ST JOHN’S Antigua – The West Indies Cricket Board has announced a three-year sponsorship deal with NAGICO Insurances as the new title sponsor for the Regional Super50 One-Day cricket tournament.

The event is the WICB’s marquee limited-overs event and will be known as the NAGICO Super50. The winning team will take home the Clive Lloyd Trophy – named in honour of the legendary former West Indies captain.

The 2014 event will feature eight teams and will be televised live throughout the Caribbean on ESPN. Matches will be played from January 30 to February 16 in Trinidad and Tobago and there will be day/night fixtures.

Michael Muirhead, CEO of the WICB, expressed great delight with the new partnership.

“The WICB is pleased to welcome NAGICO on board as a partner in West Indies cricket. Sponsorship is vital part of any sport and we applaud NAGICO for their commitment to the game of cricket,” Muirhead said.

“We look forward to a long and fruitful association which will enhance the game in the Caribbean. This new commitment by NAGICO, we believe, will be a great benefit to West Indies cricket and the development of the game in the region.”

Muirhead added: “NAGICO is a strong and respected brand and they have demonstrated their passion and love of the game by sponsoring this important event in the WICB calendar. The 2014 NAGICO Super50 will be crucial for the players as we look ahead to the 2015 ICC Cricket World Cup – a tournament we believe our team can win.”

“We are very excited to partner with WICB in the NAGICO Super50 format and thus support West Indies cricket as we have been doing for many years on a smaller scale” said NAGICO Group CEO, Imran McSood Amjad. “Personally, I eat, drink and sleep cricket so to reach a sponsorship deal is even more satisfying. I look forward to an amazing tournament and will definitely be in Trinidad to hand out the Clive Lloyd Trophy to the winning team”.

“Partnering with WICB was the next most logical step for us to take”, explains Paul Dijkhoffz, NAGICO’s Executive Marketing Manager. “As one of the fastest growing and the largest privately held insurance company in the Caribbean serving 19 territories regionally, NAGICO was looking for a suitable partner who could provide us with a platform to elevate our brand presence and market our first-rate products to a vast cricket loving audience throughout the Caribbean”.

The tournament’s host venue was allocated following a commitment from the government of Trinidad and Tobago through the Ministry of Tourism to play a major role in the execution of the tournament during the three-year period – 2014 to 2016.

The full list of schedule and fixtures for the NAGICO Super 50 will be announced at a later date.