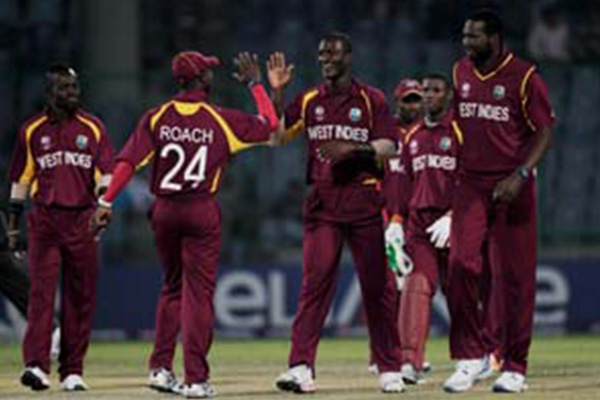 West Indies threw New Zealand their stiffest challenge of the series in the third and final Test. First, their last two wickets added 60 to stretch the innings to 367. And then, Sunil Narine dealt the home batsmen a serious examination by spin. Narine picked up only two wickets, but he could easily have had more in an unchanged spell of 22-9-43-2. Kane Williamson made a fluent half-century before suddenly turning clueless against Narine. Ross Taylor went past 400 runs for the series with another calming fifty; he also had better fortune than Williamson and managed to survive the day.

Narine and Veerasammy Permaul sent down 45 of the 64 overs New Zealand played, and West Indies are yet to use their two part-time spinners. The pitch remained unhelpful for the fast bowlers, but afforded quick and sharp turn for the slow bowlers.

Taylor and Williamson started quite positively against the spinners from 43 for 2 after New Zealand lost their openers for contrasting knocks. Hamish Rutherford fell to his own premature exuberance and Peter Fulton went in Narine’s first over after failing to rotate the strike for an hour and a half. Both wickets owing more to Darren Sammy’s excellent catching than the quality of the deliveries.

Sammy first bent low in his follow through to pluck a low catch as Rutherford drove hard in the sixth over. In the 22nd over, he snapped up an extremely sharp reflex chance at backward short leg as Fulton flicked Narine. Fulton batted 71 deliveries to make just 11. While he left well, he also hit deliveries hard and straight to the fielders.

Williamson wasn’t free-flowing as well in the company of Fulton, but opened up as Taylor came in. Both batsmen looked to take singles every over against both spinners after Sammy gave way following a spell of 10-5-17-1. They would stretch forward not looking to just smother the spin but to eagerly work the ball into gaps. Anything slightly short outside off was cut and guided for boundaries.

Even initially, though, there were problems. Taylor survived a review for leg-before by West Indies in Narine’s second over, and Williamson escaped a few times, uppishly driving Permaul perilously close to fielders. The singles continued to accrue, though, and both batsmen motored towards fifties.

Sammy was moved to bringing back Tino Best for a four-over burst which was wayward but things turned around suddenly after that. Williamson first began to have difficulties against Narine, unable to handle the sharp turn on the offbreaks. He just escaped being bowled twice in succession, and then decided to move outside off stump to try and tackle the spin. He soon played outside the line of an offbreak to be trapped in front, his review going in vain.

Narine had sparingly used the carrom ball till then. Now he began ripping them across the right-handers from round the wicket. Brendon McCullum was given three successive such balls when he came in; he missed the first two by a long margin, the third he managed to edge for a single. Taylor was left groping at a few straighter ones as well and New Zealand would have been relieved that most of the drama happened towards the close.

In the morning, Shivnarine Chanderpaul equaled Don Bradman’s 29 Test centuries, went past Allan Border’s tally of 11174 runs and remained unbeaten for the 45th time in 260 innings. Tino Best and Permaul contributed twenties to push West Indies past 350, a mark that had seemed unimaginable at 86 for 5 on the first afternoon.

New Zealand could have ended the innings on 339, but Fulton dropped Best in the slips off Corey Anderson, another blot on the hosts’ catching in this game. Best was on 4 then, and went on to make 25, his innings a mix of typical slogs and unusually sensible batting, before edging a heave to the wicketkeeper off legspinner Ish Sodhi in the 117th over. Permaul clubbed a run-a-ball 20.

The efforts of Nos 10 and 11, along with the indefatigable Chanderpaul, turned around a poor morning start for West Indies. Tim Southee began with his outswingers on target, getting Sammy to nick behind in the sixth over of the day. Sammy blocked his way to 3 off 28, following from his pair in a day in Wellington. But in the second session, he made some amends with his catching and bowling, setting the stage for Narine