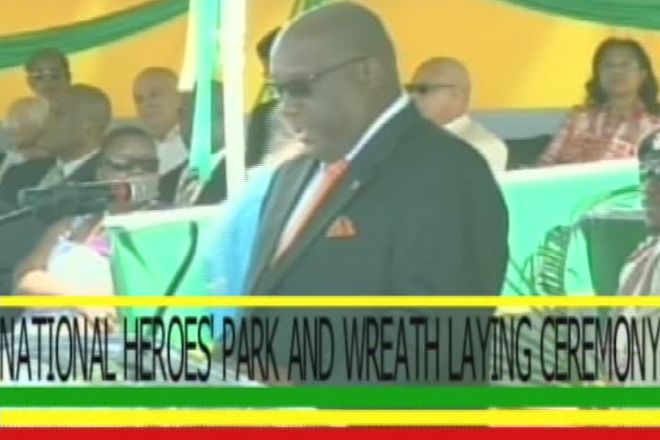 Ministers of government, The Diplomatic Corps, Primary and Secondary schools students were among those in attendance.

Observances were made for the arrival of The Governor General, His Excellency Sir S.W. Tapley Seaton GCMG, CVO, QC, JP and the Prime Minister,. Dr. Hon Timothy Harris.

Prime Minister of St. Kitts And Nevis mentioned what a historic event the opening of The National Park was and noted that it would be remembered for years to come.

He took time to recognize the 5 national heroes and stressed how each hero’s contribution to society helped to shape the federation of St. Kitts and Nevis today.

“Today we honour heroes from across all political parties but importantly we honour them not because of the party to which they belong but because of their contribution to our beloved country”, PM Harris stated.

He then acknowledged the presence of Former Governor General, Sir Cuthbert Sebastian.

Prime Minister Harris also took time to recognize chairperson of the independence committee hon. Wendy Phipps for helping to prepare and organize the independence activities being held throughout the month of September.

During his address, Premier of Nevis, Hon Vance Amory praised the national heroes for their dedication and patriotism.

“The way they redefined the character and the dignity of workers in our country must be remembered and it is their effort to establish respect and dignity to the working class in our country through the fifty’s to the seventies that we clearly are honouring them for today. The work must have been daunting, the challenges they faced were clearly very great but their effort and their desire to serve the people of their country makes them for us, National Heroes in their own right”, Minister Amory expressed.

Musical renditions of the National Anthem were provided by the Defence Force Band.

The ceremony was chaired by Press Secretary to the Prime Minster, Valencia Grant.