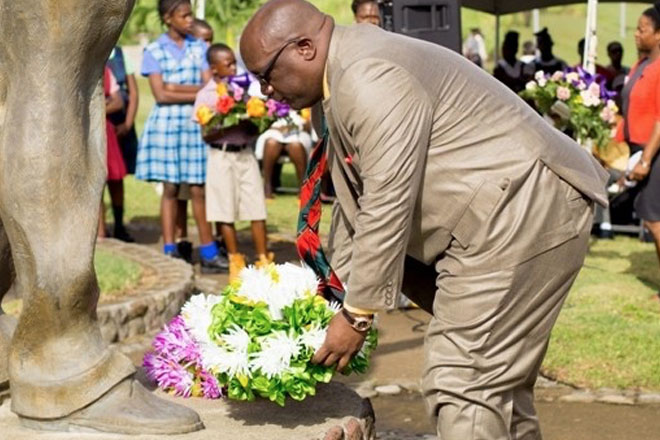 The Team Unity Government has no intention of moving the sculpture from the Robert Llewellyn Bradshaw Memorial Park to the National Heroes Park, which started construction this year, and any such assertion is rubbish.

Speaking at the unveiling ceremony, Dr. Douglas said, “We pay homage to him in this inauguration ceremony during which the monument have [sic] been unveiled at this special site, the Bradshaw Memorial Park which also has been dedicated with [sic] honour of his outstanding life and service to all of his people in the Federation of St. Kitts and Nevis. Indeed this icon of a man can rightfully be styled as ‘PAPA Bradshaw, Father of the Nation,’” according to a CUOPM press release posted October 1st, 2007 on SKNVibes.

Five months earlier on April 4th, 2007, a CUOPM press release reporting on the groundbreaking ceremony for the memorial park, said in its lead paragraph that, “The Robert Llewellyn Bradshaw Memorial Park will not only feature a full size sculpture of the Federation’s First National Hero, but also an Interpretation Centre which will be constructed in the second phase.”

On National Heroes Day last year, Prime Minister Dr. the Honourable Timothy Harris announced that, “Your Government will be designating an area to erect plaques and eventually busts of all of our National Heroes.”

Dr. Harris added: “The concept of a National Heroes Park represents a new ethos, a fresh thinking in our treatment of not one, not two, not three, not four, not five, but of all our National Heroes. This location will become the sacred and special site to which locals and tourists will come. A country and its people require its Heroes not only to provide the exemplars for the society but as a constant reminder of the values, virtues, the quality of work and vision that made our Nation great. It is right that we honour our Heroes who have contributed so meaningfully to our national development. We invite your suggestions and ideas as to how we can achieve this worthy goal of honouring our Heroes.”

During the wreath-laying ceremony at the Robert L. Bradshaw Memorial Park on National Heroes Day last year, the Prime Minister also said, “I wish to inform my fellow citizens and residents that your Government has taken certain decisions to enhance and enrich our heritage. One of these decisions relates to the former home of our first National Hero. It is intended that this historic property be placed under the aegis of the Saint Christopher National Trust. The Government had earlier entered into a lease rental agreement with the Trustees of his daughter’s estate.” Prime Minister Harris added that a museum would be erected to “commemorate the life and work of our first National Hero.”

It is unfortunate that the Denzil Douglas party should rally against the Unity administration’s efforts to both honour all of our Heroes and create a home for all who have joined the pantheon of National Heroes. Throughout its 20 years, the Denzil Douglas administration failed in its duty to our National Heroes. The country is better for Unity’s vision.