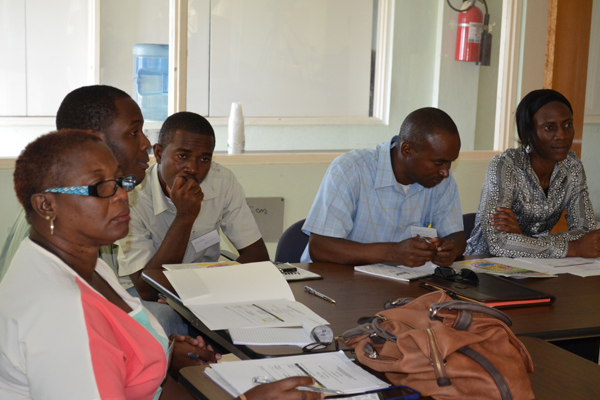 Basseterre, St. Kitts (SKNIS): Alleviating the effects of climate change is high on the agenda for the National Emergency Management Agency (NEMA) which is currently hosting a week long consultation aimed at identifying and responding to the impacts of natural and anthropogenic hazards on St. Kitts and Nevis.

The consultation features presentations on relevant climate change and disaster risk management topics, including break-out sessions between disaster managers and their stakeholders as it seeks to incorporate climate change and enhancement into the Comprehensive Disaster Management (CDM) programme. Various government officials and NGOs are participating in this workshop facilitated by a team from among CDEMA’s member states including Lyndon Robertson, Sharman James, Gayle Drakes, Saudia Rahat and Sherrod James. Presentations will also be made by the Nevis Disaster Management Department on October 23.

“The consultation will focus on the enhancement of the CDM Country Work Programme including mainstreaming climate change, as an element of disaster risk reduction,” said Ronald Jackson, CDEMA Executive Director. The CDM Country Work Programme is a disaster management manual that applies country outputs and activities to strengthen the capacity of the masses to protect personal, communal and national interests, from disasters.

Kaye Bass, Director of Foreign Affairs, noted that agencies with responsibility for disaster management “are critical, and the programmes and projects they design are important.”

“Vulnerability to natural disasters is found to have important policy implications and the decisions which will be made during these consultations will undoubtedly impact policy with regard to Disaster Management.” She also stated that pivotal to the one week consultation, are a number of objectives which will culminate in a review of the National CDM to incorporate considerations and related actions to climate change issues.

Ms. Bass noted that Saint Kitts and Nevis is considered to be vulnerable to the effects of climate change as a coastal developing state, which, “if not held in check, can adversely affect forestry and terrestrial ecosystems; coastal ecosystems; freshwater; human settlements: agriculture; human health and tourism. In its Adaptation Strategy 2006-2013, the Government outlined its commitment to efforts to reduce the impact of climate change.”

She also pointed out that the Government of St. Kitts and Nevis is pushing forward for a Green Economy with emphasis on geothermal, solar and wind energy initiatives. This serves as a clear indication that St. Kitts and Nevis is committed to reducing gas emissions thereby contributing to the effects of Climate Change.

The workshop will focus on climate variability and change and disaster management, gender vulnerability and identification of the impacts of hazards including climate change on sectors.