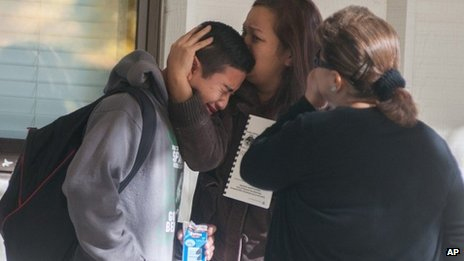 (BBC) A student at a Nevada middle school shot dead a teacher hailed as a hero for trying to convince the boy to drop his gun, authorities have said.

The student wounded two other students before turning the gun on himself, police said.

Sparks Middle School and a nearby primary school was evacuated and classes cancelled.

The incident occurred at 07:15 local time (14:15 GMT) shortly before the scheduled start of classes.

As many as 200 police officers responded to the scene but fired no shots, authorities said.

Student Michelle Hernandez told the Reno Gazette-Journal she had seen the suspect before the shooting began.

“I heard him saying, ‘Why you people making fun of me? Why you laughing at me?'” she told the paper.

Maths teacher Mr Landsberry, who had served two tours in Afghanistan with the Nevada National Guard, leaves behind a wife and two stepdaughters.

“In my estimation, he is a hero,” said Reno Deputy Police Chief Tom Robinson. “We do know he was trying to intervene.”

Sparks Mayor Geno Martini said Mr Landsberry “proudly served his country and was proudly defending the students at his school”.

The two 12-year-old wounded students were said to be in a stable condition in hospital. At a news conference, police said one student was out of surgery and the other was doing well.

At an evacuation pick-up point, parents were reunited with children, some of whom were in tears, the Associated Press reported.

“We came flying down here to get our kids,” said Mike Fiorica, whose nephew attends the school. “It’s really chaotic. You can imagine how parents are feeling. You don’t know if your kid’s okay.”

The local education authority held a session earlier this year on safety measures in its schools after 26 people, including 20 children, were killed at a primary school in Newtown, Connecticut, in December.

The attack briefly revived calls for gun control. But in a country where fatal shootings are an everyday occurrence, even that massacre did not lead to nationwide reforms.

Elsewhere in Nevada on Monday, a man opened fire in a Las Vegas nightclub after being denied a refund for an entry fee, killing a patron who tried to intervene, police said.

According to media reports, the suspect demanded his money back after he found Drai’s After Hours, a club at Bally’s Las Vegas Hotel and Casino, too small.

The club’s manager and a security guard were also shot and taken to hospital, police Sgt John Sheahan said.

The suspect was transported to hospital with unspecified injuries. Authorities believe he acted alone and expect to charge him with murder and attempted murder.