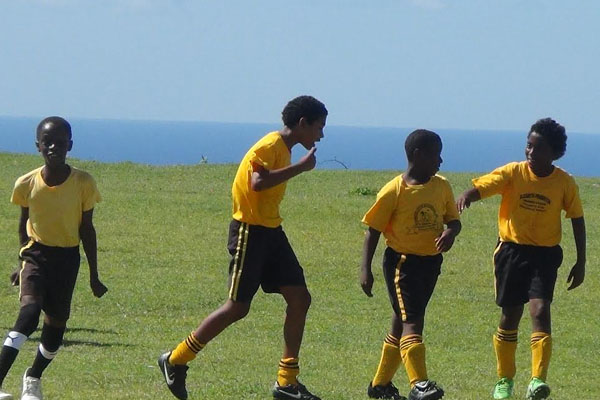 Sports Page — It was all over by the shouting. The Elizabeth Pemberton players and supporters were certainly cock-a-hoop. They seemed well on their way to winning their first match of the 2014 Giant Malt Primary School Football league.

After all, they were leading the Nevis Academy team by a score line of 2 goals to nil at half time and one of the EPPS players had already stated: “We going to give them 10 to nil.’

The match was played at the Flats in Cole Hill on Tuesday 21st October.

It all started with a hotly debated penalty in favour of EPPS when Referee ZIGGY Newton ruled that the ball had hit the player’s hand in the box when some insisted that it had come off his shoulder.

That penalty was converted and EPPS followed up with a superb goal which struck high into the right corner of the net.

However, after the half time break, the Nevis Academy team, cheered on by Teachers and parents, seemed to find renewed energy.

Ayinde George got a break on the right flank and converted and then with just about a minute to the final whistle, it was Ayinde George again, getting a clear break after a poor goal kick and struck the back of the net to equalize for the jubilant Nevis Academy team.

Meanwhile, over at the VOJN Primary School, in a B division fixture, VOJN and St.Thomas’ Primary drew their game with a nil-all score line.

Today’s A division fixture will see Charlestown Primary v EPPS at the Flats in Cole Hill. Match starts at 1.30 pm.