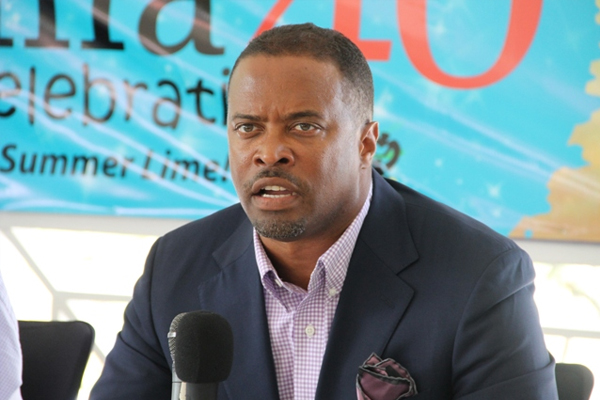 NIA Charlestown Nevis — Deputy Premier of Nevis and Minister of Culture Hon. Mark Brantley extended a special invitation to the people of St. Kitts to participate in the upcoming 40th anniversary Culturama celebrations which will officially begin from July 24th and end on August 5th, 2014.

Mr. Brantley made the gesture at a recent press briefing which was held at the Riviere House Restaurant in Charlestown. He said the Nevis Island Administration (NIA) viewed the island’s annual major summer cultural festival, as an opportunity to showcase and promote the island’s culture and the people of St. Kitts were welcome to be a part of it.

“Culturama, of course, is our premier festival. [This year] we are celebrating a significant milestone in 40 years… We see Culturama certainly, as an opportunity for us to preserve and promulgate our culture. We think that there is something very unique and very special about the island of Nevis that we have and we can share with the world…

“Understand that Culturama is our thing. It is ultimately what we make of it and I want to extend a very special invitation, no need to, but I will do it anyway, to the good people on St. Kitts,” he said.

The Culture Minister explained that here were a number of persons from St. Kitts who were slated to participate in different contests throughout the season.

“This year we have of course various contestants from St. Kitts in the shows but not only that, we have all the big bands from St. Kitts who will be on Nevis. We have performers from St. Kitts. We have various vendors whom we are working with and who we work with every year from St. Kitts and I really want to extend an invitation to come over and have a great time on the sister island for Culturama 40,” he said.

Mr. Brantley also used the opportunity to urge Nevisians to welcome all visitors and noted that this year’s landmark celebration was twinned with a Homecoming Celebration.

“I am very heartened in particular that a lot of the people who are telling me they are coming and they are bringing friends and family with them who were not necessarily Nevisian. Indeed the group that is coming from the UK say that they have Trinidadians and Jamaicans and the like with them. I would want all of us, the entire island, to welcome our guests,” he said.

The 40th anniversary of Culturama will be celebrated under the theme “Revelry, Splendour, Creativity! It’s Culturama 40!”