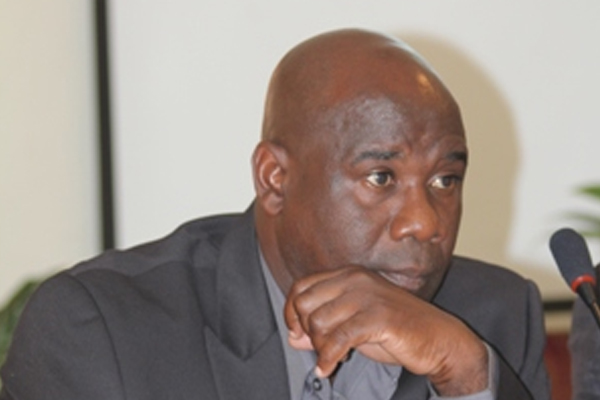 NIA Charlestown Nevis — Agriculture Minister on Nevis Hon. Alexis Jeffers called on farmers to increase production and to be strategic in their approach for a more consistent production.

Mr. Jeffers was at the time delivering remarks at the recently concluded Conference on the Economy 2013, which was hosted by the Nevis Island Administration (NIA) on October 18, 2013 at the Red Cross conference room. The event which was held in preparation for the 2014 budget was held under the theme “Building the pillars for a strong society, a healthy people and a vibrant economy.”

“I want to challenge our farmers to not only increase production but to be strategic in your approach so that the production can be consistent. We have made considerable inroads into the hospitality sector where production is concerned but the major concern has always been consistency. We must be more mindful of this and find practical ways to overcome this major hurdle,” he said.

The Minister noted that the island’s farmers had the relevant technical assistance available at the Department of Agriculture and as such consistency of production should not be one of the major challenges faced by the Department.

“We should not be faced with the situation where for three months of the year we have an abundant supply of a commodity, a scarcity for the following three and then another glut for the next two. In order for us to capitalise on the demands of the tourism sector, we must be more consistent in our production,” he said.

Mr. Jeffers contended that as a result of the problem, farmers had to return to crop scheduling which he explained would right the situation.

“Farmers, there is the dire need to return to crop scheduling which proved to be extremely successful when efforts were made at entering the Four Seasons market. If it proved successful then, it can be successful now. It was the crop scheduling concept which eventually led to what became known as the Nevis Model, an initiative that was hailed not only here in Nevis but throughout the region,” he said.

Meantime, Mr. Jeffers urged farmers to step up their use of technology citing that they should also be prepared to make greater investment.

“As we advocate increased and consistent production, we also urge farmers to step up in your technology, but to do so you must be prepared to invest. Most of us should be aware of the benefits of shade house production or protected Agriculture and that is one avenue to which our farmers can look.

“The initial cost may seem prohibitive but the long-term gains can prove tremendous. The Ministry of Agriculture may not be in a position to assist financially but could facilitate the transfer of the requisite knowledge to successfully execute shade house production. We can organise the necessary training through our allied agencies,” he said.

In addition, Mr. Jeffers told farmers that if they adopted new technology apart from the training exercises organised by the Ministry of Agriculture, could source their own technical information from the Internet.

“This is something that many farmers are already engaged in, but in this the information age, I would encourage all farmers to get on the computer and learn new things. If you don’t, then ask your children to do it for you.

“Agriculture is dynamic and every day something new is being discovered, new information is being released on various aspects of the sector and we must keep pace with new technology and information,” he said.