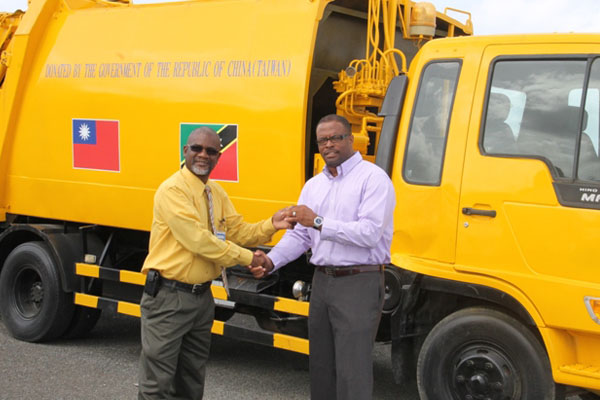 NIA Charlestown Nevis — Deputy Premier of Nevis and Minister of Health Hon. Mark Brantley turned over the keys to a waste disposal truck to Chairman of the Nevis Solid Waste Management Authority Board of Directors Carlisle Pemberton on July 23, 2014, at Long Point, two days after it was handed over to Premier of Nevis Hon. Vance Amory, by Republic of China (Taiwan) Resident Ambassador to St. Kitts and Nevis His Excellency Miguel Tsao at a brief ceremony at Long Point.

Mr. Brantley noted that the equipment, which was a gift from the government and people of the Republic of China (Taiwan), would enhance the capacity of the Authority to keep Nevis clean.

“I can assure you that the Solid Waste Management Authority is going to put this truck to good use and that the people of Nevis, ultimately, will be the beneficiaries in ensuring that they can get their garbage collected in a timely manner and that the island can be kept clean,” he said.

The Health Minister thanked the donors and further explained that although the Authority had a larger garbage truck in its fleet, its size had posed some challenges with refuse collection.

“We have a larger truck and so we have had some complaints in the past that that truck might be too big to go into some of the smaller areas and so I am quite happy that this size of truck has come because what this does, is it allows us to get into some of the little village roads and ensure a more efficient and holistic approach to garbage collection so Ambassador, thank you.

Mr. Brantley told the Ambassador of the Republic of China (Taiwan) that his country had been a solid friend to Nevis over the years and the island had enjoyed good relations with tangible benefits that continued to impact positively on Nevisians…

“Mr. Ambassador … I think that you have been a wonderful friend to Nevis and that your government and people, have been the types of friends that I don’t believe we have seen elsewhere and that since our establishment with diplomatic relations with the Republic of China (Taiwan), our two peoples have enjoyed bonds of friendship which are unbreakable.

“You continue to commit, when you spoke to me months ago, that you wanted to donate a truck to assist us in the collection of garbage. At the time, you said you would let me know in the future when this truck arrived. I was very pleased when I got the notification from the Premier’s Office that we would have this ceremony and that the truck in fact had arrived.

“I want to say that for the people of Nevis these are very important gestures. These are tangible indications of your support and the support of the Government and people of Taiwan. So it’s not just lip service, it’s not just people who talk about it. It’s something that has happened and continues to happen,” he said.