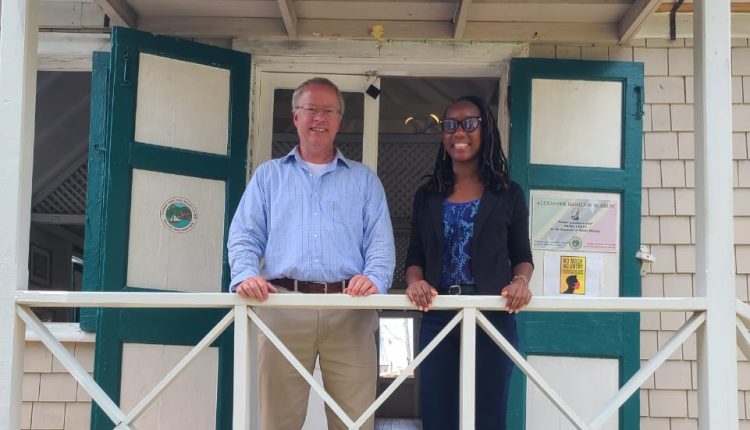 Speaking with the Department of Information on July 15, 2022, Ms. Jahnel Nisbett, Director at the NHCS, said the Society’s membership is extremely proud and excited to be adding to the existing collection of artefacts that celebrate Alexander Hamilton’s legacy in Nevis.

“We’ll be unveiling a bronze Alexander Hamilton statue, depicting Hamilton as a young man, on the grounds of the Museum of Nevis History on July 22. The statue was donated to us by one of our members, Robin Summers, and it was donated through the Alexander Hamilton Awareness Society, which is assisting with coordinating the efforts to have it erected here in Nevis.

“At the Nevis Historical and Conservation Society, we are trying to find a good balance of Nevis’ history from the days of slavery and our modern history. We have the Trott House, also known as the Hamilton House, where we feature information about Alexander Hamilton as well as some artefacts. That is very useful in attracting tourists from the international market, mainly from North America, where he was one of the Founding Fathers of the United States. He was born in Nevis, so the statue is expected to be a highlight for visitors and residents alike coming to the museums on Nevis,” she said.

Mr. Tom Oller, Vice-chairman of the Alexander Hamilton Awareness Society in the US, is presently in Nevis for the unveiling of the statue and to attend a number of activities being held July 18 to 23 to celebrate Alexander Hamilton.
“We are very grateful to Jahnel and the Nevis Historical and Conservation Society for accomplishing so much towards making this project possible and to Robin Summers for this generous donation,” he said, adding that several persons have travelled to Nevis for the unveiling and are looking forward to enjoying all that the island has to offer.
The activities include a Hamilton Tea Party on Monday, July 18, which will serve as a fundraiser for Alexander Hamilton Scholarship Fund established by the Trott family. The Fund awards 20 deserving secondary school students in Nevis annually with a bursary for uniforms, fees, books and other supplies.
There will be a hike to tour waterfalls near Nevis Peak on July 19, as well as a Historical Lecture “Statues: How They Can Memorialize, Harm, and Heal” by Cheyney McKnight, Manager of Living History at the New York Historical Society. This takes place at the Nevis Historical and Conservation Society at 5:30 p.m. and is free of cost.
On Wednesday, July 20 there will be a Clifton Estate Rum Tasting and Bottling Tour; a Lunch at Golden Rock Inn; an Original Hamilton Documents Display Event with Seth Kaller; and “Alexander Hamilton: Immigrant” Talk by Sergio Villavicencio.

On Thursday, July 21, Michael E. Newton will present a Historical Lecture on the history of Alexander Hamilton’s mother and family (the Faucetts) and their lives in Gingerland, Nevis, from about 1700 to 1745.

Friday, July 22, “Unveiling Day” there will be a visit to the Nevis Heritage Village, a Lunch at the Hermitage and the feature event, the unveiling of the statue entitled “Alexander Hamilton As A Young Man” on the grounds of the Museum of Nevis History at Samuel Hunkins Drive starting at 4 p.m.

The monument will be the only statue on the island which showcases Nevis’ most famous Native Son who went on to reshape the American economy during his appointment as the first secretary of the Treasury.