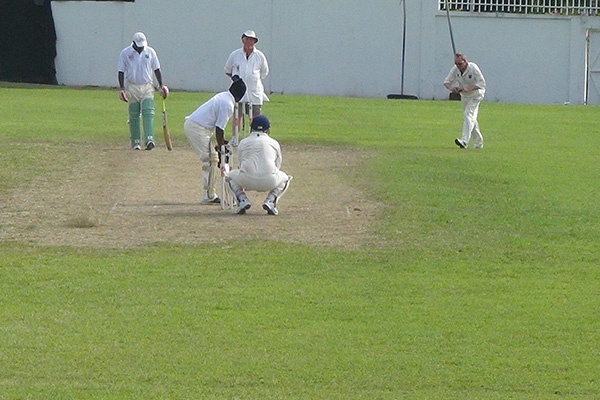 The touring England forties club, engaged the Nevis over 35 team which is preparing for the Luther Kelly tournament in St. Maarten next weekend.

The Nevis team under the captaincy of Merlin Liburd won the toss and batted first.

Merlin Liburd went early but Curtis Morton and Carl Tuckett teamed up in an enterprising partnership with Morton being the main aggressor , while Tuckett bided his time.

When Morton holed out at long on from a skier, Carl Tuckett upped the tempo and three huge maximums included in his knock, were really special.  He eventually retired out after securing a well deserved half century.  The Nevis team eventually getting to 158 in their 20 overs.

When the Englishmen batted, they lost wickets at regular intervals with Elroy JIMBO David picking up two in his only over and his brother Earl David being absolutely miserly with a three wicket haul.

The England Forties team will now journey to St.Kitts to play against the St.Kitts over 35’s and then return to Nevis on Sunday for another game against the Nevis team.