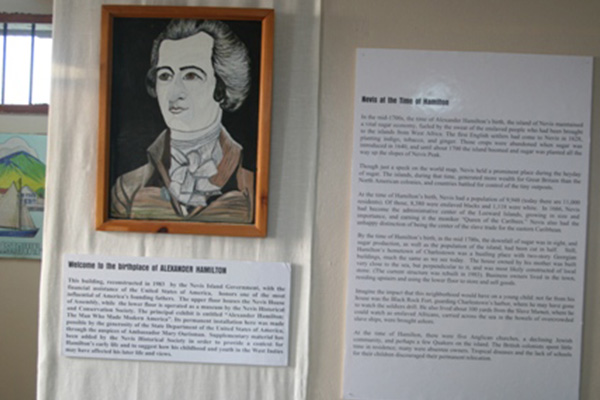 NIA Charlestown Nevis — Premier of Nevis the Hon. Vance Amory, left Nevis for a visit to New York City where he will take part in the annual Happy Birthday Hamilton programme from January 10 to 11, 2014. The programme will be held in celebration of the birthday of a Founding Father of the United States of America Alexander Hamilton.

Last year’s programme was the first ever celebration with a virtual link between Hamilton’s birthplace on Nevis and birthday festivities in New York City but this year the events will be expanded.

Happy Birthday Hamilton kicks off in lower Manhattan on Friday, January 10 at 11:45 a.m. with a ceremony at Bowling Green near the Charging Bull statue, where a flag of St. Kitts and Nevis will be raised. Mr. Amory is expected to lead the ceremony.

“We are so honoured that the Premier is coming all the way up from Nevis to celebrate Alexander Hamilton’s birthday in New York City. His presence is a very special and symbolic connection of the important tie Nevis and New York City shares,” said President of the Alexander Hamilton Awareness Society Mr. Rand Scholet, which hosts the Happy Birthday Hamilton programme.

Following the flag-raising ceremony, a special rededication of the Alexander Hamilton monument will be held at the Trinity Church from 12:45 p.m. The monument which was erected over Hamilton’s grave more than 200 years ago, was recently cleaned and restored.

Both locations will be linked via a video network connection. The ceremony will begin at 4:30 p.m. and a symbolic cake will be cut by Mr. Doug Hamilton, a descendant of Alexander Hamilton. Deputy Premier of Nevis and Minister of Tourism Hon. Mark Brantley is expected to attend the event on Nevis where the names of the Alexander Hamilton Scholarship recipients would also be announced.

Premier Amory is expected to return to Nevis on Monday, January 13, 2014.