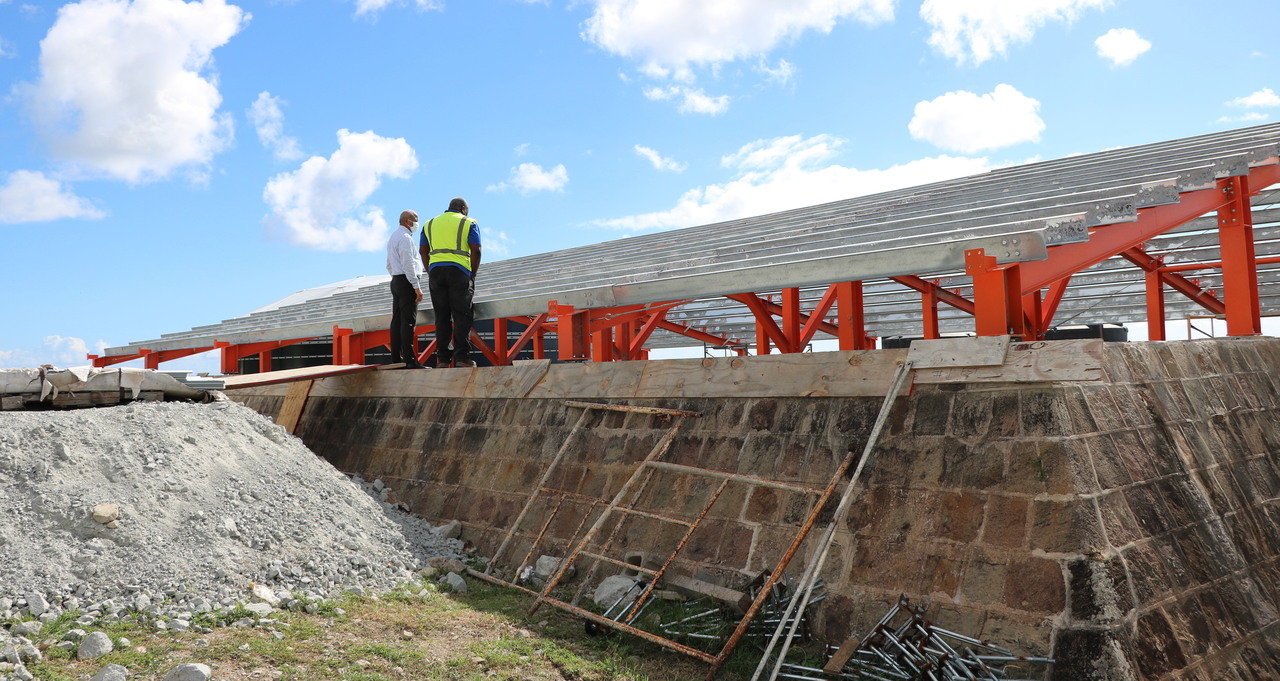 Hon. Spencer Brand, Minister responsible for Water Services in the NIA, visited the facility recently, where he was updated on the progress on the installation of new roofing for the older stone storage unit, referred to as 1904.

“When I became the minister with responsibility for water and did an assessment of this Hamilton site I recognized that we would have had some storage issues here because there was an old fiber glass tank that was decommissioned for some time and we had the 1904 tank which had its roof caved in.

“So I thought the site at Hamilton needed to be seriously upgraded. We would have installed a new water storage tank, we would have put online the high yielding well with the water filtration system, and now we are completing the project with replacing the roof of the 1904 tank,” he said.

The Minister thanked Ms. Tonya Bartlette, Water Department Manager, and Mr. Floyd Robinson, Manager of the Water Resources Management, for their oversight in ensuring the project was kept on pace and on budget.

He also used the opportunity to thank his Cabinet colleagues for recognizing the importance of water to all sectors of Nevis. He pointed out that once the project is completed there would be greater redundancy built into the system, especially in the Charlestown area.

According to Ms. Bartlett “We are hoping to have the project completed soon. With this tank, we’ll be able to have additional storage for the people of Nevis, because our hope is to extend our reach in terms of whom we serve from this location. We serve Charlestown only from this area; however, we are hoping to extend to as far back as the Cades Bay area. The hope is to give some ease to the aquifers on the northern side of the island and the eastern side of the island.”

Mr. Robinson said the roof rehabilitation of the older tank will likely be complete within the next few months. He said once the roof is installed, the tank will be cleaned and then re-commissioned.

“This tank holds about 360,000 of water and based on the condition and the fact that we need extra storage when we came to do the project we decided to hold onto this and try to get it fixed as we are doing now. The project is almost completed; the tress is on, the rafters are on and what’s left is for the cover to be put on, and do a final cleaning on the inside.
“What we are trying to get on the island of Nevis is about three days storage capacity. So God forbids if all of our wells were to go down simultaneously we should have about three days supply that we could maintain (consumers) and address the problems.
“Technically we will have almost a million gallons of storage in this are when this is done, and that’s not a small feat,” he informed.
Continue Reading
Share
You might also like
National