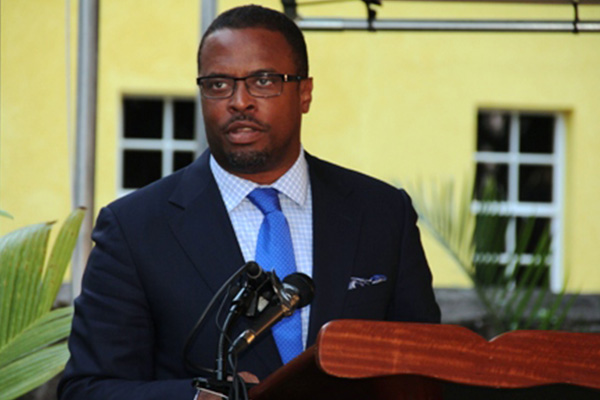 Nevisians urged to remember the accomplishments of Nevis born, US statesman Alexander Hamilton

Nia Charlestown Nevis — Every Nevisian should know that in Hamilton they have a Nevisian who defied all odds and who transcended poverty and social prejudice. That was the view expressed by Acting Premier of Nevis and Minister of Culture Hon. Mark Brantley when he delivered remarks at the Happy Birthday Alexander Hamilton Nevis.

The event which was hosted by the Nevis Historical and Conservation Society (NHCS) on January 10, 2014, was held on the grounds of the birth place of Alexander Hamilton who was born in Nevis more than 200 years ago. At the same time a similar ceremony was taking place in New York and was attended by Premier of Nevis Hon. Vance Amory. Both events were connected via the Internet.

“The life of Hamilton, for me, is irrefutable evidence of the oft-stated truism that it matters little where we are from or the circumstances into which we are born. The ultimate measure of a man is not where he is from but where he is headed.

“Our people in Nevis and in particular our children should know that in Hamilton, we have a Nevisian who defied all odds, who transcended poverty and social prejudice, who rose meteorically above the station of his birth. His life and work and achievements should act as a signpost for us all that we are limited not by the size of our island but only by the size of our ambitions,” he said.

Mr. Brantley noted that the celebration of Hamilton’s birth in Nevis and the United States should be seen as a time for reflection when those gathered gave praise for his birth, his life and the contributions he made to the world.

It was for that reason, Mr. Brantley stated, that the irony and marvel of a son of the soil should not be lost.

“The irony and indeed the marvel must not be lost on any of us that a tiny island of a mere 13,000 souls gave to the world a son that helped usher into being a Nation which now stands at over 315 million people and is the mightiest that the world has ever seen. Just as a tiny acorn grows into a mighty tree, so too, a son of tiny Nevis became a Founding Father and First Secretary of the US Treasury.

“So my friends here assembled and those gathered in New York, let us today remember our shared son Hamilton and let us pledge to spare no effort in ensuring that the bridge his life provides between Nevis and the United States remains ever sturdy, ever strong, everlasting,” he said.

Meantime, Mrs. Evelyn Henville Executive Director of the Nevis Historical and Conservation Society (NHCS), in remarks also lauded the achievements of Mr. Hamilton who she reminded had never forgotten the fact that he had Caribbean roots.

“From a boy on Nevis, to the end of his days, Alexander Hamilton gave his best thought and energy. Hamilton’s Caribbean roots have been undervalued by many who have not even taken the time to read something about his life.

“Make no mistake about it; Hamilton’s life experiences on Nevis and St. Croix prepared the way for his future and it was, as Hamilton told his own children, the most useful part of his education. In a letter to his wife, he referred to himself as a “Creole.” Hamilton had embraced his island roots,” she said.