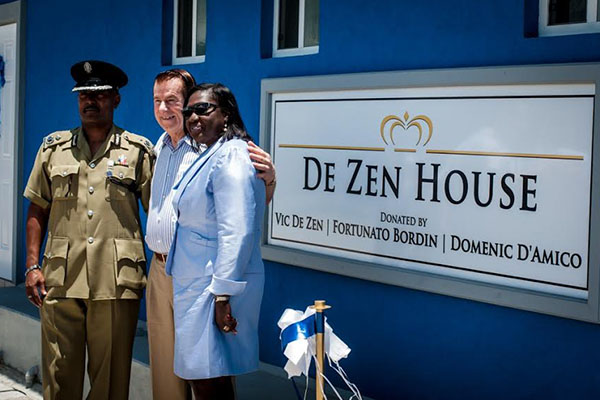 Assistant Commissioner of Police Ian Queeley said this was a significant occasion.

“This building … goes a long way to build capacity within the organization,” he stated. “This is something that is indeed critical if we are to meet the challenges of modern day policing.”

Assistant Commissioner Queeley cited the recent graduation of 13 females of Course No. 39 last March and revealed that more women are embracing the numerous opportunities that membership in the RSCNPF offers.

Arun Maharajh, Director of the Royal St. Kitts Beach Resort Group of Companies, revealed that his group, which consists of the St. Kitts Marriott Resort, is grateful for the relationship it has with the federation.

“This partnership again demonstrates the commitment to the people of St. Kitts and Nevis,” he revealed. “The [structure] underwent a major renovation of the existing 1,300 sq ft. building to what it is … today.  The monetary contribution of this project is estimated to be US $100,000.00 and was built in approximately three and a half months.”

He added that other contributions have been made in the past to a number of other institutions including the Children’s Home, which caters to orphans and children under the state’s care as well as the Cardin Home, which serves senior citizens.

Permanent Secretary in the Anti-Crime Unit Her Excellency Astona Browne highlighted that the donation of the facility is another realized component of the National Adaptation Strategy where focus on the security sector is critical, given that it is inextricably linked to the successful implementation of the national development agenda.

“The Anti-Crime Unit will therefore persist with the fulfillment of its principal policy objective in its effort to maintain economic, social and political stability to foster growth and development in our country,” she stated. “We will also persist in reducing crime so as to enhance the safety and security of our communities and to build capacity through human resource development and to collaborate with national, regional and international agencies in strengthening the safety and security mechanism in the federation.”

Permanent Secretary Browne emphasized that government will continue to give full support towards building capacity and human resource development for persons of the security agencies, enhancing infrastructure development and modernization, and instituting legislative reforms.