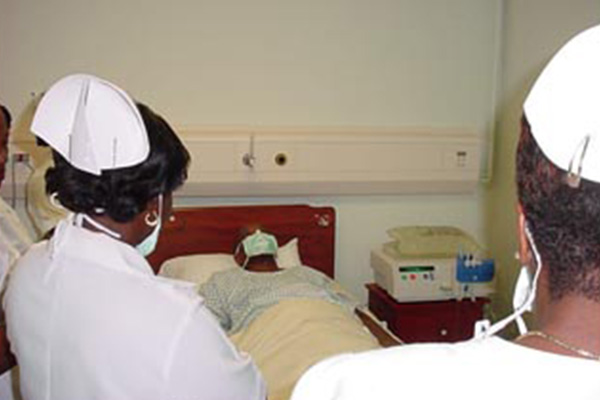 Basseterre, St. Kitts, (CUOPM) — The new Haemodialysis Unit at the Joseph N. France General Hospital is a response to deal with the incidence of chronic kidney failure.

In highlighting the St. Kitts-Nevis Labour Administration’s continuing health initiative, Federal Minister of Health, the Hon. Marcella Liburd, said the unit is to become operational over the next month.

She told the Cabinet of Ministers during Monday’s meeting that the public/private partnership will help a number of persons, with varying degrees of renal failure, to lead normal lives.

At a recent ceremony to open the unit, St. Kitts and Nevis’ Prime Minister the Rt. Hon. Dr. Denzil L. Douglas and Minister Liburd highlighted, what was yet another of the promises made in the re-election campaign in January 2010.

“Hypertension, otherwise known as blood pressure, and diabetes are two of the main chronic diseases we have to contend with. Studies have shown that these two diseases areas major causes of kidney failure,” said Health Minister Liburd.

She added that the haemodialysis unit is a welcome and life saving addition for the treatment of kidney diseases for the people of St .Kitts and Nevis.

Prime Minister Douglas, speaking also in his capacity as a trained medical doctor, remarked that he was “particularly gratified” by this development and pointed out that one possible consequence of hypertension and diabetes is kidney disease, noting that “kidney disease is a serious matter indeed.”

PM Douglas indicated his Government’s decision 18 years ago both to dramatically expand access to healthcare via the construction and refurbishment of healthcare centres and hospitals as well as to provide a range of never before available healthcare services to the people of St. Kitts and Nevis.

“I don’t even have to mention the large number of persons who have been trained in the provision of medical care and medical services from as high as those who are consultants to those who are assisting on the wards, as nursing assistants,” he said.

The nephrologist of the unit is Dr. Miriam Rodriguez-Delgado of Cuba and two fully-trained haemodialysis nurses from the Philippines have been employed along with 20 local nurses who were trained overseas in Haemodialysis services.

Some of the rooms of the unit, which comprises of four dialysis machines, are the Treatment Room, Water Treatment Plant, Injection Room and the Sluice Room.