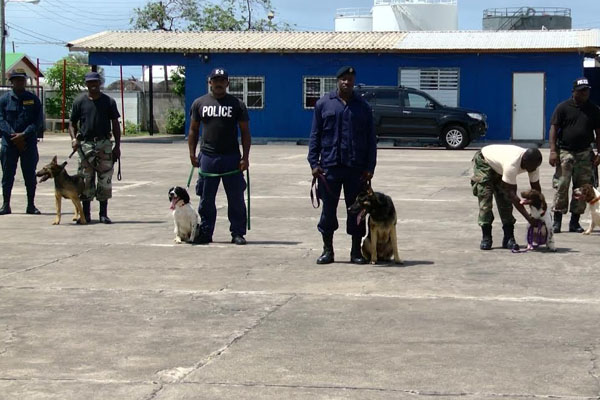 (ZIZ News) — The Police Force’s K-9 Unit has been boosted with the addition of seven police dogs or K-9 Officers.

The dogs have been trained in various roles such as explosives detection, narcotics detection and general tracking.

For the past week officers have been engaged in training sessions focusing on handling and taking care of the dogs leading up to a certificate presentation ceremony on Tuesday at the Police Training Complex.

In giving an overview of the training, Superintendent in the Operations Directorate, Adolph Adams, noted that the dogs had to become familiar with various areas in the Federation and that included training sessions on Nevis.

“Training was taken over on Nevis because you want to acclimatize the dogs in all the different areas that they would be carrying out there functions. So we thought it was fitting to go over to Nevis and conduct a number of searches on Nevis so that when we go to Nevis the dog would be well acclimatized with the Nevis conditions,” he said.

Lead facilitator, Greg Belle said the participating officers improved significantly throughout the course but the real work is only beginning.

“What we’ve done is only the basics and it’s now up to you guys to develop that and I really hope that you do push yourselves as well as your authority to be better because I know you can be. And I know that you’ve got really good dogs and you’ve all improved massively,” he said.

Deputy Commissioner of Police, Hilroy Brandy commended the police and Customs officers who volunteered to be k-9 handlers.

“I know in this part many persons don’t want to associate with dogs because they know the difficulty, the grooming and the taking care of the doga and the cleaning of the dog mess and I’m very happy that you four police officers and two Customs officers have come forward and volunteered your time,” he said.

Following the presentation of certificates and awards the officers provided a demonstration of the K-9 Unit in action.