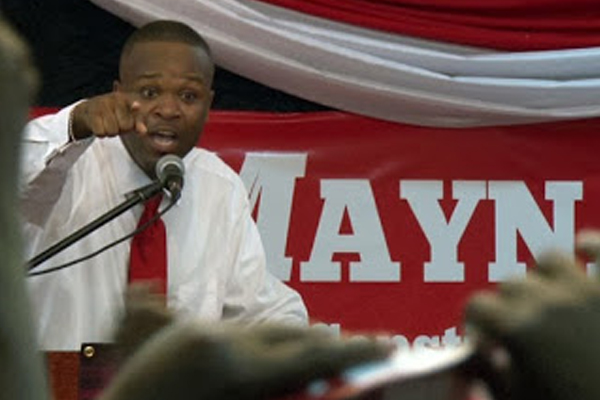 Basseterre, St. Kitts — Konris Maynard, Labour’s latest candidate to be announced ahead of the 2015 Constitutionally due General Election, introduced himself to hundreds of residents of the West Basseterre community on Thursday (Oct. 3) night. Maynard is seeking to be elected to serve in the National Assembly, the island’s legislature, to succeed veteran politician and six-term, 64-year-old Sam Condor.

The 30-year-old electrical and computer engineer graduate of the University of Waterloo (Canada) said that it was “with utmost humility and a deep sense of patriotism” that he accepted the nomination to be the St. Kitts-Nevis Labour Party (SKNLP) candidate to represent the Constituency of St. Christopher #3 (West Basseterre). He paid tribute to those who served before him in what has become a traditional Labour Party stronghold.

“Although originally from our sister isle of Nevis, Sir [Joseph Nathaniel] France made his home in this constituency, constituency #3, the constituency where life begins in St. Kitts, the constituency that sparked a revolution in the entire Caribbean in the aftermath of the 1935 Buckley’s Riot where Sir France found himself playing the role of peacemaker in order to bring an end to the Riot. Comrade France took up the baton then, to run the race of empowering the people of this area and the country as whole. During his life, he was a part of every progressive movement to advance the cause of: workers without rights, people without land, and the masses without a voice. He never shirked in his responsibility to be a man of the people. Such was his service that he successfully contested nine (9) General Elections from 1946 to 1984.”

Sam Condor who has served as Labour’s representative for the constituency since 1989, has surpassed retirement age and will be replaced with Konris Maynard in the upcoming Election.

“This burning desire to contribute to the country of my birth, as I have done in many ways before now through Calypso, community involvement, donations to numerous charitable causes, mentorship and motivational speeches for our youth, in cultural expressions like drama, has now brought me to a place where I have answered to a higher calling of service; that of Political Representation of the People of West Basseterre. With God as my witness, I have decided to take up this challenge with a pureness of heart, with a genuine conviction to work on behalf of the people. My modus operandi is not to tear down one man, rather, it is to lift up a people.”

“I have joined this Labour Movement because throughout my intense study of this political landscape, although there is still much to be perfected within the Labour party, and although there are improvements to be had within the realms of Government like constitutional reform, public sector reform, and integrity in public life reform, it is clear, beyond a reasonable doubt which political side has the purest intentions going forward.”

Maynard accused Condor of dropping the symbolic baton for the Labour Party and vowed to represent well. He said, “I am here tonight to pick up that baton and run on behalf of the people of West Basseterre and Win BIG for you! …Some people may have thought that things will magically get done by sitting back, driving around, and saying “You alright” and smile. This is not how it works. You have to get up, get dirty and work hard to see your vision through. The poignant words of my mother ring loud in my head that hard work always pays off. So I endeavor to work hard and Win Big for you!”

Maynard expressed his full confidence in the people of the area and of the country as a whole. “I have an unshakable belief that we are capable of achieving all that our minds can conceive. There is not a day that goes by, when I am having lunch or simply relaxing that I am not thinking about ways in which we as a people can further elevate ourselves to be the Gold Standard of Caribbean Prosperity. Our talent is unmatched, our gumption is profound, and when we channel our energies in a direction of positivity with the sole purpose to uplift not only ourselves but our neighbors, our friends and our country, I cannot imagine what can stop us from attaining the pinnacles of success in all facets of our unique society.”

In addition to traditional issues of land and home ownership, creation of sustainable jobs, food security, and others, Maynard zoomed in on some of the other current issues facing the people of St. Kitts and Nevis in the context of the global community. “In this new age of technology we must continue to foster an environment where software companies of our indigenous people can build the next best app for the Apple App Store or the Google Play Store. I cannot help but to visualize a St. Kitts and Nevis that is energy independent. We have sun all year round 12 hours a day minimum, we have a consistent flow of the North east trade winds, and the ever real prospect of Geothermal in Nevis. I am pleased with the efforts made by this Labour Government on this front especially in light of the recent development of the Solar Farm at the Robert L. Bradshaw International Airport. We must forge on toward energy independence as this will certainly reap significant savings in energy over the long run.”

Konris Maynard was up until Thursday, most popularly known for his extracurricular pastime of singing local folk music aka calypso. This has attracted fans from all demographics living on the island and made a special appeal to them. “In my calypso career, I have come across many staunch supporters of my music who are unapologetic supporters of the PAM party. I want this type of love to permeate every nook and cranny of this mother colony.”

Maynard would be 32-years-old by the Constitutionally due date for the next General Elections. If elected, he would be one among a few who have been elected at such a relatively young age. Closer to home, he would join Roosevelt Skerrit who was elected as Dominica’s Prime Minister at the age of 31.