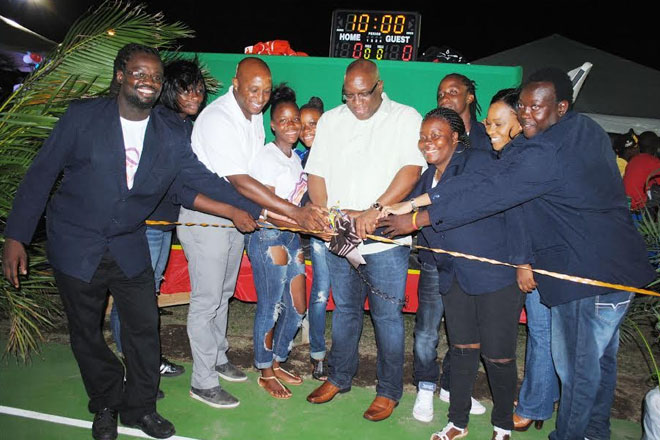 Prime Minister Harris has been its main sponsor for eleven of its 12-year existence and when the new look league kicked off on a refurbished Molineux hard court Saturday evening (October 10th) he thanked the organisers of the league, players and members of the community that have made it the top performing basketball league.

“I want to recognise that this year it is different,” said the Prime Minister. “The facilities on which you are going to play are significantly enhanced. This league is about us in the constituency showing the talents that we have enjoining other groups from elsewhere and other players to come make a wonderful thing happen in Inner City.

“We are happy this year we are off to a fresh start and a better start, and I hope that we will exhibit the unity through all the different stakeholders who have made this league so interesting this year and I give my best wishes to all the teams, but may the best team win.”

Prime Minister Harris, while recognising the new sponsors he singled out for mention Mr Naeem John the Koi Resorts | Residences representative who was present. Other sponsors, according to the league’s organising committee are: Montreal Management Consultants, Avis Car Rental and the TDC Group of Companies.

Spectators had turned out in their numbers, and according the Hon Prime Minister, the league was inaugurated and developed largely to bring the people of Constituency Number Seven together, to provide a constructive avenue in which people could engage in something they love and use that to bring joy and pride to the villagers and the communities in Inner City.

“I am happy that over the years this league, dubbed this year the Harris Basketball League, has been doing well bringing joy and most positive energy not only to the people of Molineux, but for all the participating teams and communities,” pointed out Dr Harris.

In thanking members of the community who would have over the years volunteered to contribute to the success of the league, he also mentioned the vendors and operators of bars whom he said created a wholesome environment in which the league would take place in the last twelve years.

“Importantly too, we have been able to conduct this league without having need, by and large, to call in the security forces because the players, the spectators generally have been on good behaviour and I want to compliment them for that, and hope that will continue,” observed the Prime Minister.

Prime Minister Harris thanked the 40-year veteran basketball administrator Mr James ‘Barman’ Hanley, who was present and gave a word of advice to the players as it relates to discipline in the game.

He added that Mr Hanley’s contribution to the game was such that he recommended him to the Governor General to be recognised for his contribution and he was, this year, one of the awardees for Independence National Awards Honours list for community activism, in particular for 40 years of dedicated service in support of basketball.

“I want to say thank you to the people of this Constituency who have stood by me and with me, and who have helped me to help you in ensuring that our Constituency moves from strength to strength,” concluded the Prime Minister amid a thunderous applause from the spectators.

This year the league promises to be much more competitive with eight teams taking part. They are Strivers, Free Up, Redemption Squad, Inner City Ballers, Ottleys, Fair Share, Tabernacle, and Ballaholics.

The league was declared open when Prime Minister Harris joined with members of league organising committee and Mr Naeem John of Koi Resorts | Residences to cut the ribbon. The first game on the newly refurbished hard courts was between Ottleys and Inner City basketball teams.