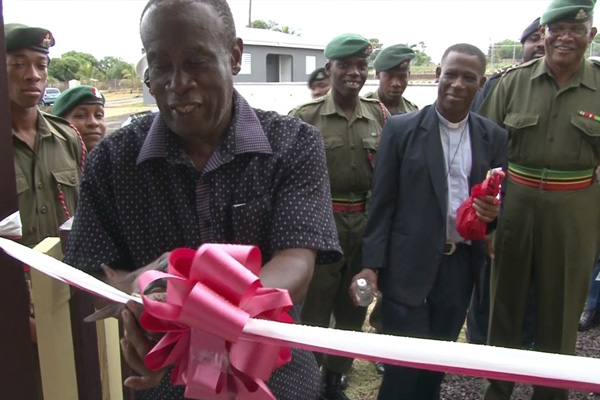 Basseterre, St. Kitts (SKNIS): A higher morale amongst members of the Junior Non-Commissioned Officers (JNCO) of the St. Kitts-Nevis Defence Force (SKNDF) will be better maintained thanks to the opening of Club on Wheels Bar and Lounge on Monday (June 30).

The lounge cost approximately $15,000.00 and construction lasted several months running from February 10 to June 16, 2014. The designers stripped an out of service military transport bus and installed a bar, storage and refrigeration equipment and comfortable seating. Accompanying housing structures were built around the bus to provide cover from the elements.

Interim Chairman of the JNCO Club Corporal Althea France said she was pleased to lead the Club at the time of the establishment of the new facility.

“The Junior NCO motivation directly impacts the productivity of the Force,” Cpl. France stated. “If the Junior NCOs are lacking in motivation, chances are we will not be effective in doing what we are supposed to be doing and as such the Force will not be successful.

“I can see the club as being instrumental in helping members to figure out what they really want from being members of the SKNDF and gather feedback for the Force command [who are responsible] for making our members experience in the Force worthwhile.”

“I can’t find words,” he said. “… It is more than 20 years that we have being trying to do something similar to this.” Maj. Percival described the effort to construct and the eventual look of the Club on Wheels Bar and Lounge as top class. He shared some advice with the Junior NCOs.

Warrington Phillip, Darren Patrick and Junior Stevens, inmates of Her Majesty’s Prison, assisted the transformation of the bus. They received tokens of appreciation from the JNCOs at the opening ceremony.