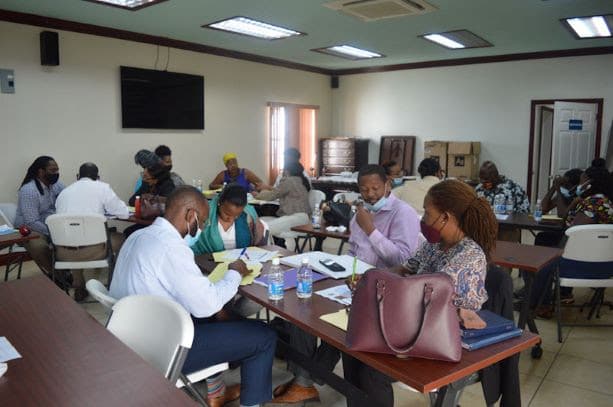 Basseterre, St. Kitts, May 21, 2021 (Ministry of Social Development and Gender Affairs): A new Social Protection Policy for the Federation is currently being developed.

The new policy, which will replace the last Social Protection Strategy (2013-2017), began being developed in August 2020 by Dr. David Cownie of the Social Impact Assessment and Policy Analysis Corporation (SIAPAC) – a Cayman Islands-based Consultant with over thirty-four (34) years experience in the social protection field.

While Dr. Cownie has been unable to travel to the Federation due to COVID-19 travel restrictions, he was able to conduct several online interviews with local stakeholders late last year to gain initial input into the development of the Policy, and facilitate (via Zoom) a half-day Consultation with senior government officials in February 2021.

To obtain the perspectives of a broader section of society, the Ministry also recently hosted two (2) Stakeholder Consultations – the first of which was held from May 11th-12th, at the Customs Training Room, Bird Rock, St. Kitts, while the other was held from May 13th-14th at the Gender Affairs Conference Room, Government Road, Nevis, for participants in St. Kitts and Nevis respectively.

The Consultations were attended by Ministers with oversight of Social Development matters, the Honourable Mr. Eugene Hamilton and the Honourable Mr. Eric Evelyn, respectively.  In giving remarks at the start of the Consultations, the Ministers outlined the Federation’s longstanding efforts to protect its citizens from poverty and reasserted the Government’s commitment to the creation of a more comprehensive Social Protection strategy.

Project Officer II and Workshop Coordinator, Mrs. Manners-Woodley, noted that the workshops were well attended by of total of fifty (50) representatives from various Ministries, organizations, and civil-society groups, who were able to apply their experience and expertise to key areas of the document.  “It was an intense four-day exercise which involved a lot of brainstorming, but the feedback received will go a long way into refining the draft Social Protection Policy, so that it can effectively serve the needs of our population”, she said.

The new Social Protection Policy is expected to be complete by June 2021.