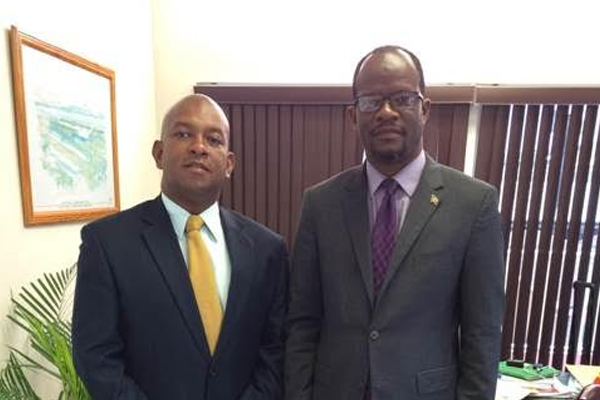 Basseterre, St. Kitts (CUOPM) — The new Country Representative for the Organisation of American States (OAS), Mr. Terence Craig has arrived in the Federation of St. Kitts and Nevis and paid his first courtesy call on Minister of Foreign Affairs, the Hon. Patrice Nisbett.

He is to pay courtesy calls on Governor General, His Excellency Sir Edmund Lawrence and the Prime Minister, the Right Hon. Dr. Denzil L. Douglas.

Mr. Craig is a national of Suriname, who has held many portfolios in the Ministry of Foreign Affairs in his home country namely.

He has been CARICOM Coordinator and Head of the Americas Division while being the Cabinet member for the Ministry of Foreign Affairs.

He then joined the ranks of the OAS as the Representative in Grenada since 2008. He is highly qualified in the field of law and international relations.

The Ministry of Foreign Affairs in a statement said the Federation of St. Kitts and Nevis has had an excellent relationship with the Organisation of American States.

“As Chair of the Permanent Council of the OAS, the Federation has been successfully executing its role. The Federation has benefitted for many years from the offering of undergraduate and postgraduate scholarships in a wide array of areas. The OAS has also provided training for civil servants in several areas including law and education and renewable energy,” said the statement.