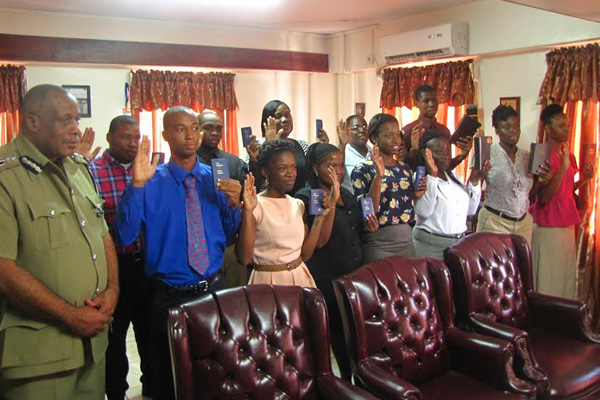 (ZIZ News) — On Wednesday 10th September 2014, fourteen (14) persons were sworn in as members of The Royal St. Christopher and Nevis Police Force, in the Office of the Commissioner of Police. Present for the swearing in were Deputy Commissioner of Police Stafford Liburd, Force Personnel Officer Osmond Petty, and Press and Public Relations Officer, Inspector Lyndon David.

Twelve (12) persons were sworn in as Constables and two (2) as Special Constables.

Before administering the oath of the office, Commissioner Walwyn informed the newly sworn officers that they are joining The Royal St. Christopher and Nevis Police Force, which is the principal Law Enforcement body in the Federation. They were instructed that they can be assigned to either island based on departmental need. The Commissioner emphasized that they are expected to function under the disciplinary code of the Force and that the Office of Professional Standards is charged with the responsibility of investigating complaints against police officers, and conducting audits and inspections within the Federation’s police force. The recruits were told that if they breached the law or code of professional conduct, the matter would be investigated and if the results of the investigation leads to criminal charges, they will be charged criminally. Commissioner Walwyn also informed the new officers that from his office nothing is swept under the table and the appropriate course of action will be taken.

The Commissioner thanked the newly sworn for choosing The Royal St. Christopher and Nevis Police Force and encouraged them to continue their education as it would open doors for promotional advancement within the police force. It must be noted that this is the second time in the Commissioner’s term that majority of the recruits are local and college graduates.