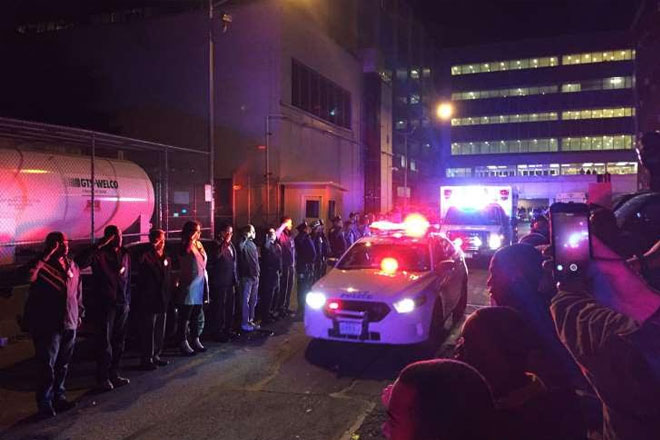 Randolph Holder, who was assigned to the NYPD’s housing unit, was responding at about 8:30 to reports of gunfire in one of the area’s large housing projects. He and other officers were pursuing a suspect along a pedestrian overpass when the exchange of gunfire took place, Police Commissioner William Bratton said during a press conference early Wednesday

Holder, 33, was struck in the head. He was taken to Harlem Hospital Center in critical condition and died at 10:22 p.m. ET.

During the incident, Holder’s partner, who was not identified, returned fire, hitting the suspect in the leg, Bratton said. The injured man was tracked down about four blocks away, Bratton said, and transported to a hospital. He was taken into police custody upon his release later Wednesday, a police spokesman said.

Mid-morning on Wednesday the spokesman confirmed to USA TODAY that the suspect was Tyrone Howard, 30. According to the New York Daily News, Howard has an extensive criminal history and was wanted for questioning in an earlier shooting in the same neighborhood when he encountered Holder and other officers.

The investigation into the incident is ongoing and police are looking for witnesses, as well as other suspects who may have been involved with the initial incident. On Wednesday morning police closed the FDR Drive, where the shootings took place, as part of the investigation, The road was later reopened.

Three men were detained in connection with the event, according to local media reports, Meanwhile, Bratton said officials would meet with the New York district attorney’s office on Wednesday to determine the charges against the suspect.

Randolph was the fourth New York officer shot and killed on the job in the past 11 months, Bratton said.

On Wednesday morning, the mayor ordered all flags to be flown at half-staff in honor of Holder. “All flags shall be lowered to half-staff effective immediately until the day of Officer Holder’s interment, by order of Mayor Bill de Blasio,” said a statement from city hall.

“This includes the American Flag, the New York State and City flags and the POW-MIA flag. Flags shall be flown at half-staff on all City buildings and stationary flagstaffs throughout the five boroughs.”

“We are humbled by Officer Randolph Holder’s example,” de Blasio said at the press conference.

Holder was a five-year veteran of the police force, Bratton said. An immigrant, he became an officer in July 2010. He was a third-generation officer; his father and grandfather having both served in their native Guyana.

“So three generations of police in this family, and now the latest generation served here with us in the New York City Police Department, and tonight did what every other officer in the NYPD does when the call comes – he ran toward danger. It was the last time he will respond to that call.

“I extend our deepest condolences to his family, especially his father, who, in his time of grief, sought to comfort the officers in PSA 5,” Bratton added.

Patrick Lynch, head of the New York Patrolmen’s Benevolent Association, called for support from the community.

“New York City police officers every day, we go out and carry ourselves like superheroes on the streets,” he said. “But the reality is, when we’re attacked, we bleed, when we bleed, we die, and when we die, we cry… these police officers need your support as we bury our fellow police officer, but it can’t end there. We need your support every day, on every corner, in every neighborhood, so we can continue to carry ourselves like superheroes, so we can save you and protect you.”