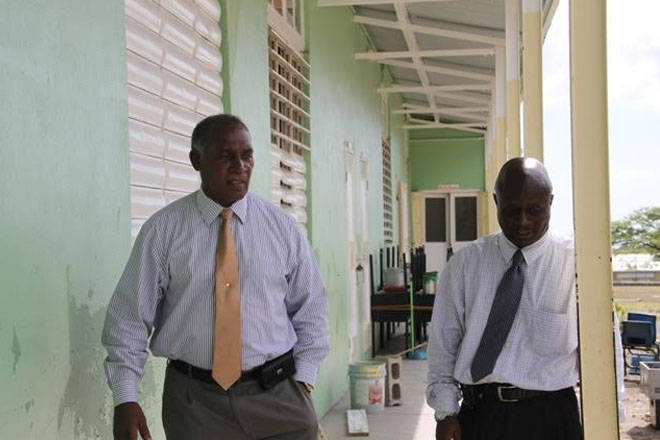 NIA Charlestown Nevis — Parents of students who vandalise school and other public property, may soon be held responsible for cost associated with restoration work. Premier of Nevis and Minister of Education Hon. Vance Amory said restoration work at the schools, due to vandalism, was costing the government, and by extension the people of Nevis, vast sums of money.

Mr. Amory made the comment when he spoke to the Department of Information on August 18th, 2015, while on his second tour of public schools for a first-hand look at work being done under the Schools Rehabilitation Project, funded by the Nevis Island Administration (NIA).

“We are going to ask the heads of the schools, the teachers of the schools that if any child is caught vandalising that he or she be disciplined and we may get to the point where we ask the parents to pay for the cost of restoring that which was vandalised,” he said.

Mr. Amory, accompanied by Permanent Secretary in the Premier’s Ministry Wakely Daniel, noted that it is important for the children to understand that there would be consequences when they do something that is improper.

He stated that one of the most important duties for the children is to learn to respect themselves, their fellows, teachers, parents and also public and private property.

“I think that is something which we have to begin or continue to instil in our children.

“This project, which I am visiting today, is part of that commencement of making sure they have very a conducive environment in which to work, in which to study and that they need to take care of it,” he said.