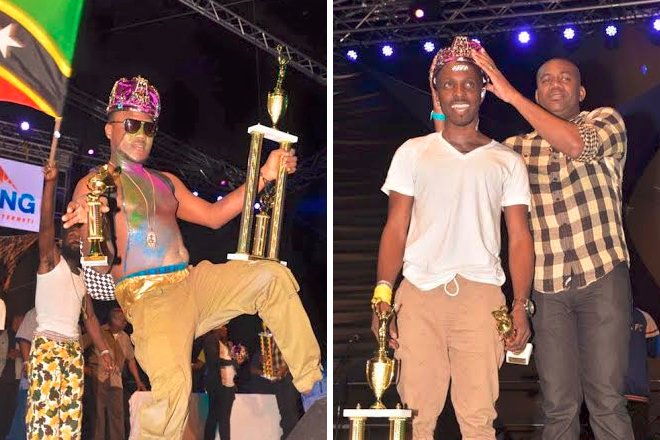 (ZIZ News) – After seven hours of high energy performances, newcomer Nicha B and former king, Mr. Hype came out as the big winners at the Sugar Mas 44 Soca Monarch competition.

Nicha B was crowned the 2015/16 The Cable Groovy Soca Monarch, finishing ahead of last year’s king, Mr. Bagnall, who performed “On Di Road”, K Jah with “Link Up” and Fastastic Tunda singing “Sweet Hand Man”.

His first time in the Soca Monarch arena, Nicha B, performing his hit song “Can’t Wait”, stole the show and sent the crowd into a frenzy when he introduced Trinidad and Tobago soca sensation, Benjai to perform the official remix to “Can’t Wait”.

Speaking to ZIZ News after being crowned, the artiste said he felt really confident following his performance.

Nicha B also commented on the collaboration with Trinidadian soca artiste Benjai, noting “Give thanks to Benjai still, coming out of his busy schedule in Trinidad coming to St. Kitts to merge with the song and just link Trinidad and St. Kitts Carnival as one. Just put us on the map for once, on the international soca arena”.

In the ZIZ Power Category, Mr. Hype recaptured the crown after an energetic performance of his comedic song, “Bite”.

He said it is the fitting culmination to his year of hard work and preparations.

“I’ve been waiting and preparing all year, since last year’s Soca Monarch show,” Mr. Hype stated. “I keep thinking back on all the preparations, the workouts and everything that I did to get here to today and you know it’s amazing the hard work and everything that was put into the preparing really paid off and I’m really just happy we were able to take back the crown, take back the title.”

The show was carried live on ZIZ Radio 96.1 FM, and streamed at www.zizonline.com.