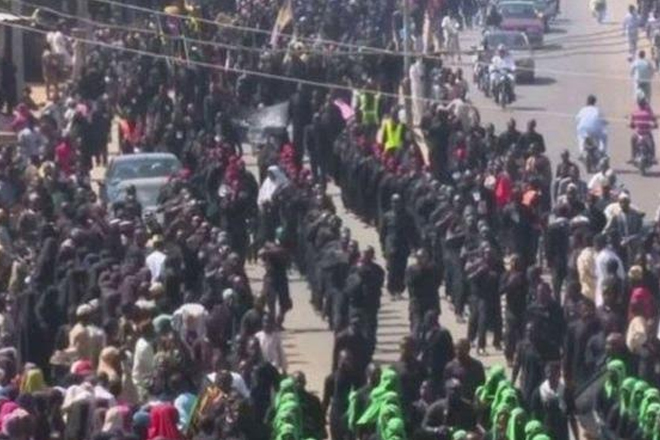 (BBC) Shia Muslims are protesting in six northern Nigerian cities against a military crackdown they allege has left hundreds of their members dead.

Many businesses have shut in Kaduna, one of the cities worst-affected by the demonstrations, a BBC reporter says.

The sect, known as the Islamic Movement of Nigeria (IMN), denies the allegation.

According to Iranian media, during his conversation with Mr Buhari, President Rouhani inquired about the fate of Sheikh Ibraheem Zakzaky, the IMN leader arrested after troops besieged his home in the northern city of Zaria.

The IMN alleges that the military killed hundreds of its members and destroyed a religious shrine and the sheikh’s home during the raid.

A leading human rights activist, Chidi Odinkalu, has backed that figure and called on President Buhari to conduct an independent investigation into what happened.

“It is not tolerable. Nigerians have the right to live like citizens of any other nation,” he told the BBC.

“How can a professional military respond with guns to people protesting with stones?” Mr Odinkalu added.

The latest protests were triggered by a photo that went viral on social media, purportedly showing him sitting on the ground with a bloodied face.

The IMN has its headquarters in Kaduna, where security forces have taken up positions at strategic places as IMN members protest in the streets, says the the BBC’s Nura Muhammed Ringim in the city.

Some residents have stayed in doors because they fear violence, he says.

The cities of Kano, Katsina, Sokoto, Zamfara and Bauchi have also been hit by protests.

In Iran, a group gathered in front of the UN office in the north-eastern religious city of Mashhad to protest about the violence in Nigeria, Tehran-based private Tasnim news agency reports.

The military has not given casualty figures, but has denied the IMN’s claim that the wife of Sheikh Zakzaky, Zeenat Ibrahim, was killed during the weekend clashes.

Maj Gen Oyebado, the army head of the Kaduna division, said on Monday that she was in the army’s custody.

He did not confirm or deny the death of the couple’s son, Sayyid Ibraheem Zakzaky.

Last year, three other sons of Sheikh Zakzaky were killed in clashes between the army and pilgrims in a religious procession.