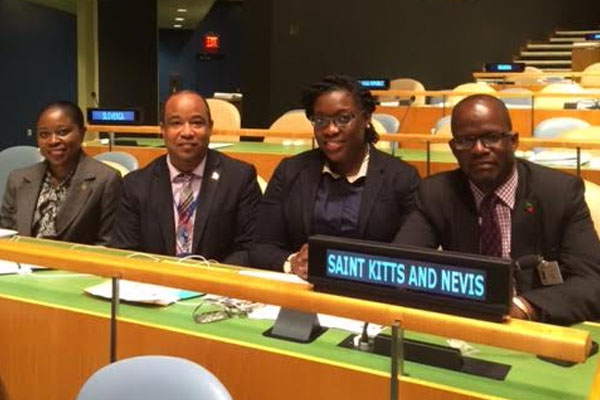 Basseterre, St. Kitts (CUOPM) — The Federation of St. Kitts and Nevis told World Leaders Monday night, that the twin-island Federation has solidified its position as a leader in the Caribbean.

Minister of Foreign Affairs, the Hon. Patrice Nisbett addressing the 69th General Assembly in New York said St. Kitts and Nevis has attracted foreign direct investment, specifically in its tourism infrastructure, and building its industrial base in the light manufacturing – the electronics and electrical component sector.

“We have also successfully forged public-private partnerships in renewable energy ventures providing sustained growth for our economy and successfully implemented a comprehensive approach to the management of our national debt. Our plan include debt restructuring with international financial institutions, an exchange offer for government bonds, curtailment of public borrowing to sustainable levels, and the creative land-for-debt swap initiative,” said Minister Nisbett, the first Nevisian to address the World Body.

He reminded the international organisation that one of the peculiar vulnerabilities of Small Island Developing States like St. Kitts and Nevis, is its susceptibility to economic and environmental shocks, which results in a state of high indebtedness.

“It is no secret that high public debt affects the ability of governments to achieve sustainable development in all its dimensions,” said Minister Nisbett, pointing out that in the area of economic sustainability, “we developed in 2011, and successfully implemented a comprehensive approach to the management of our national debt. Our plan includes debt restructuring with international financial institutions, an exchange offer for government bonds, curtailment of public borrowing to sustainable levels, and the creative land-for-debt swap initiative.”

Minister Nisbett noted however, that inspite of the fiscal discipline it is important to be mindful of the fact that one severe climate event can erase the gains achieved, effectively sending the country into a vicious cycle which makes it difficult, if not impossible to achieve sustainable development on the economic front.

He echoed the call for a new paradigm to the assessment of the policy of graduation by using the narrow policy of per capita gross national income to confer “middle income” and “high income” status on developing countries.

“St. Kitts and Nevis is of the view that this measure is grossly inadequate, and needs to take into account the peculiar vulnerabilities of Small Island Developing States,” said Minister Nisbett.

“We commend the Commonwealth Secretariat for the innovative work it has been spear heading to encourage leading international financial institutions to accept a broader matrix including the vulnerability index to correctly assess the true economic situation of SIDS like St. Kitts and Nevis,” he said, emphasizing “that graduation to a higher income category makes it more difficult to access resources to sustain our economic, social and environmental policy objectives.”

“Borrowing funds at a high rate on the international financial market only serves to perpetuate the vicious cycle of debt and threatens our sustainable development. This, Mr. President, runs contrary to the goals and objectives of the Post-2015 Development Agenda.

To this end, I call on the international community, including the leading international financial institutions to broaden the scope of assessment of Small Island Developing States, in order to avoid the creation of scenarios where debt sustainability measures undertaken at the national level are undermined by policies of the said institutions,” said Minister Nisbett.

“St. Kitts and Nevis stands ready to work with the international community by contributing our ideas to the debate in order to ensure a most favourable outcome,” he declared.