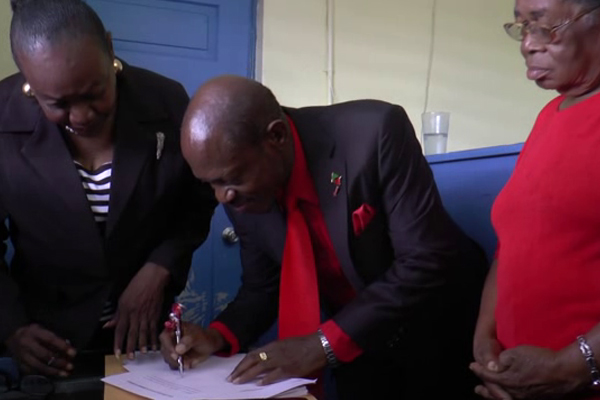 (ZIZ News) — Hundreds of supporters filled the streets of St. Kitts and Nevis Friday 6th to witness the nomination of their political candidates to contest the 2015 Federal Elections.

In St. Paul’s, Prime Minister the Right Hon. Dr. Denzil Douglas was swarmed by dozens of labour party supporters as he entered the police station.

Speaking to supporters afterwards, he expressed his gratitude to the people of his constituency.

He said, “You can be assured that I shall deliver what you expect of me after the 16th day of February when you would have elected me again to office. And so I want to thank all of you for being here…those of you who gathered here since the early hours to witness history in the making from this police station, the police station of St. Paul’s. I love you! I love every single one of you. I shall not fail you and on the 16th day of February, you must not fail me.”

Dr. Harris said he’s now putting his confidence in the people of constituency seven to re-elect him as their representative.

“This exercise is one that I always look forward to at election time. It is one way for me to meet with the people who have shown me nothing but love in every election. This year we are looking forward to an even more massive victory because of the strength of the unity. So it’s a delightful experience,” Dr. Harris noted.

Speaking to ZIZ, Dr. Drew said he was thrilled to be given the chance to represent the people.

“Well I feel elated for today. I think today is a good demonstration that democracy is alive and well in our St. Kitts and Nevis and I am happy that the people of Constituency #8 would have given me the opportunity to go and fight to be there representative.”

Election Day in St. Kitts and Nevis is scheduled for Monday 16th February.

Over 5000 Lbs Of Roots And Tubers Procured To Boost Crop Production In St. Kitts