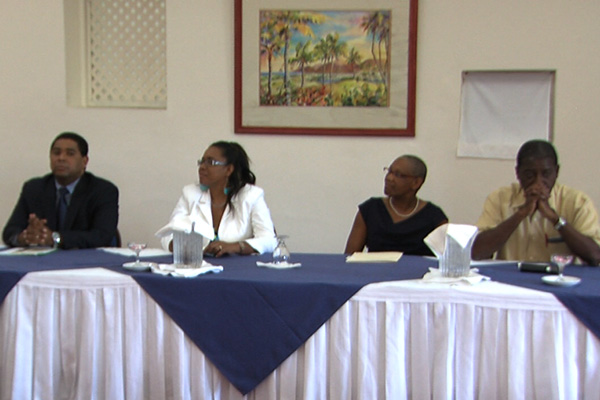 ZIZ News — Officials from the Ministries of Health in both St. Kitts and Nevis, along with other interested stakeholders met on Thursday to finalise and launch a National Policy Plan for the Prevention and Control of Non-Communicable Diseases until 2017.

Statistics were reported that revealed the scope of the problem in St Kitts and Nevis as it relates to NCD’s or Non-Communicable Diseases.

Minister of Health, the hon. Marcella Liburd called it another milestone on the agenda of her ministry in addressing the burdens of NCD’s.

She said NCD’s account for the major causes of morbidity and mortality in St. Kitts and Nevis.

“A 2010 situation analysis of the federation’s health showed that heart disease, stroke, cancer and complications of diabetes accounted for sixty-six percent (66%) of all deaths,” she said.

She also said there are some similarities to the risk factors of NCD’s including smoking, hypertension, elevated blood glucose and cholesterol levels physical in-activity and obesity.

The health minister said that the financial burden of fighting these diseases is too high on the public purse.

“Approximately six percent (6%) of total GDP is spent on the provision of healthcare. A substantial portion of this goes directly to reducing, preventing and treating incidents of Non-Communicable Diseases,” she said.

According to Minister Liburd, the launch of the National Policy and Plan for the Prevention and Control of Non-Communicable Diseases shows a more structured all inclusive approach to reducing the high incidents of NCD’s in St. Kitts and Nevis.