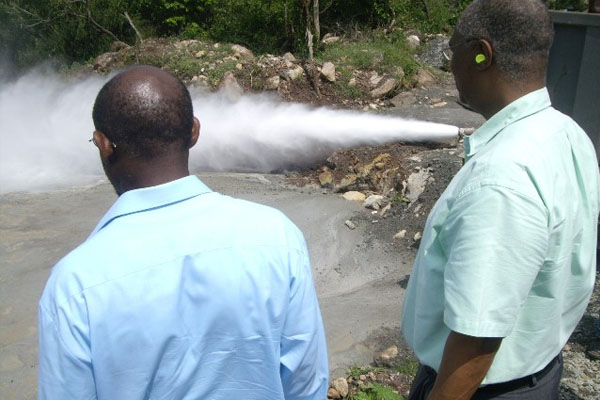 OAS assistance to St. Kitts and Nevis in alternative and renewable energy highlighted

Basseterre, St. Kitts (CUOPM) — The Washington-based Organization of American States (OAS) has been involved in several initiatives in the Federation’s move towards the development of alternative and renewable sources of energy.

“Beginning in 2006, the work of the OAS through its Department of Sustainable Development intensified and the organization has maintained an ongoing programme in the Federation to support the country’s goal in sustainable energy development. In this connection, the OAS’s initiative began with a programme to assist the Federation’s Government in the preparation of a comprehensive Sustainable Energy Plan (SEP) and adopted a specific strategy for the increased use of renewable energy sources with emphasis on energy efficiency,” said former OAS Director in St. Kitts and Nevis, Mr. Starret Greene.

In an exclusive interview with the Communications Unit in the Office of the Prime Minister (CUOPM), Mr. Greene, who completed an eight and a half year tenure in the Federation outlined the OAS’s efforts via several specific technical opportunities.

“In the area of geothermal, through the Department of Sustainable Development, the OAS began with the Geo-Caraibes Programme (financing from GEF) which included St. Kitts and Nevis. The project included geo-scientific (geology, geochemistry, and geophysics) work as well as assistance in policy and financing programmes,” said Mr. Greene.

He said that following the conclusion of the technical work in St. Kitts and Nevis, there were several private sector companies that expressed an interest in exploring the development of geothermal resources.

“An agreement in principle was reached between the Nevis Island Administration (NIA) and the company, West Indies Power (WIP). With the recommendation of the Federation Government, the OAS supported the NIA in (1) development of a comprehensive geothermal resource law, (2) preparation of the contract with WIP, and (3) development of the Power Purchase Agreement. Drilling for geothermal got on the way and WIP showed excellent signs of a strong resource. The Power from this development will be used on both Nevis and St. Kitts, and may offer potential for exports to neighboring countries,” said Mr. Greene, who has taken up a new appointment in Suriname.

In the area of Wind energy, with the support and input of the OAS, wind development is a reality on Nevis and progress in building a Wind Farm near Belle Vue continues on the island of St. Kitts. The OAS engaged the services of a consultant who helped to organize the wind and bio-fuels developments in the Federation. Through the OAS, terms of references were developed, the legal framework for power purchase agreement were established and international standards governing the operation of wind farms were also put in place,” said Mr. Greene.

In the area of bio-fuels, the OAS supported St. Kits and Nevis in a transition from sugar cane industry, to bio-fuels since the sugarcane industry closed in 2005. The OAS completed a comprehensive feasibility study in this regard.

“We also secured St. Kitts and Nevis’ participation in the US-Brazil Bio-fuels partnership. The OAS, with support from the USA and Brazil engaged the Fundacion Getulio Vargas to undertake an assessment of the land uses that may be applied to a bio-fuels industry. Based on this work, there have been several commercial bids to develop this business. With support of an OAS Team, a developer was selected and the organization facilitated the negotiation of a contract between the Federal Government and the said developer, Mr. Greene said.

The OAS was the driving force behind the establishment of an Energy Department within the Ministry of Public Utilities, Works, Housing and Energy. Through the Caribbean Sustainable Energy Program, the OAS provided the financial resources that supported the setting up of an energy secretariat within the Ministry.

As part of its Energy and Climate Change Partnership of the Americans (ECPA) programme, the OAS engaged KEMA Consulting Firm to conduct a pre-feasibility study of an inter-island electrical interconnection between the Federation of St. Kitts and Nevis and Puerto Rico and between the two islands, St. Kitts and Nevis. Both studies were completed in 2012 and presented to energy Stakeholders in the Federation.