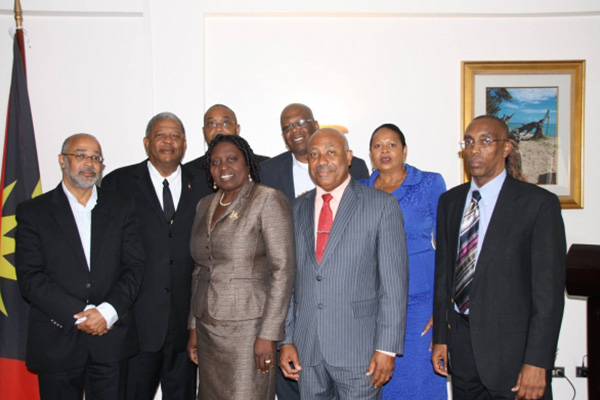 Basseterre, St. Kitts (CUOPM) – St. Kitts and Nevis’ Commissioner to the Organisation of Eastern Caribbean States (OECS), Her Excellency Ambassador Mrs. Astona Browne was among OECS Commissioners who met with the Chairman of the OECS Authority, Antigua and Barbuda’s Prime Minister Dr. the Hon. Baldwin Spencer at his office in St. John’s, Antigua.

Prime Minister Spencer in his remarks to the meeting indicated that it is important for the Chairman to meet with Commissioners who form part of the new governance arrangements in the Revised Treaty of Basseterre and who play a significant supporting role in the effective running of the organisation.

The Chairman stated: “As Commissioners you have national responsibilities, ensuring that the decisions and work programmes of the Organization are carried out in the member states.  In this aspect of your work, you collaborate with different Ministries and other agencies of Government in your individual member states. At the regional level, Commissioners also have a responsibility to the Organization to determine its strategic direction and to ensure the effective management of its operations.”

On the agenda were issues related to sustainable financing to support the work programme of the OECS, transition issues and the vision of newly appointed Director General Dr. Didacus Jules, who was also present at today’s meeting with the Commissioners.

The meeting also discussed the urgency in convening the OECS Assembly and the Inaugural Session of the OECS Economic Affairs Council.

As part of the recommendations from the meeting, the Commissioners and the newly appointed Director General will meet in retreat to further discuss the work programme of the organisation and the Dr. Jules’ vision on transforming the role of the OECS and matters relating to the economic union.

According to Prime Minister, the meeting was a success and allowed for open and frank discussion on the way forward for the organisation.

Also present at the meeting were Senior Management Officials from the OECS Secretariat and Technicians from the Department of Trade, Industry and Commerce.