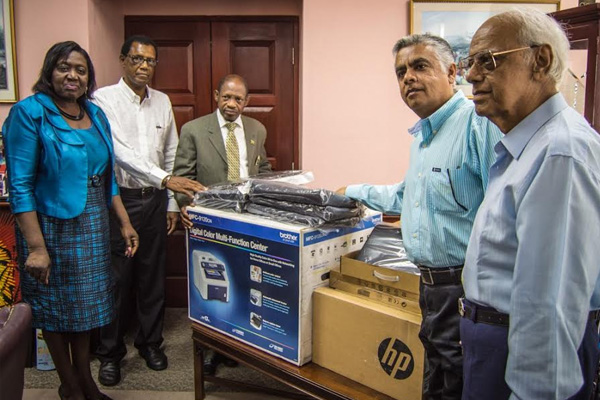 Basseterre, St. Kitts (SKNIS) — A private partner of the Government of St. Kitts and Nevis has stepped forward to donate technology tools to the Anti-Crime Unit that will facilitate the continued upgrade of equipment used by the security services.

The company’s director Naresh Daryanani disclosed that his company has been doing business with the local government through the Central Purchasing Unit (CPU) for approximately 15 years. He explained that giving back is a hallmark of his company and every milestone such as their 25th Anniversary being observed in October 2014, the business gives back to its trading partners.

“Over the years … we have also developed a very good friendship that we respect more than the customer relationship that we have with each other and that has been something that we will treasure,” Mr. Daryanani stressed. “It’s not only about business, it has a lot to do with relationships and we hope and pray that that will continue throughout the years.”

Prime Minister Douglas thanked the Daryanani brothers and the Chairman of Office World who were also present for the handover. He said the equipment will assist government’s national security apparatus.

“Training in particular of our human resource is critical,” the Prime Minister stressed. “Providing the necessary technological support for what we are doing in fighting crime to a large extent, is responsible for the success that we have been seeing in the continuing reduction of crime and so we want to thank you.”

Prime Minister Douglas also commended the team for the service they provide to the CPU and wished them the best for their silver jubilee celebrations and beyond.