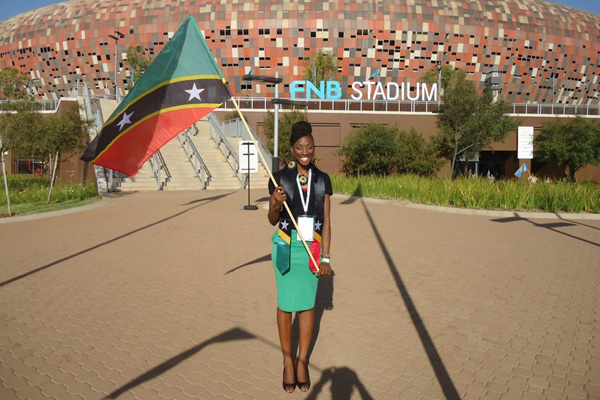 CARICOM Youth Ambassador and newly minted One Young World Ambassador, Ms. Sonia Boddie has described her participation at the One Young World Summit, held in Johannesburg, South Africa from October 2nd -5th, as an “incredibly inspirational and life changing experience.”

Boddie noted that from the first event, which was the Opening Ceremony at the famous FNB Stadium, (which was used as the main venue for the FIFA 2010 World Cup), where she served as the flag bearer for St. Kitts and Nevis amongst 189 other countries, she felt truly impacted by the scale of the Summit, and the melting pot of cultures, and emerging youth leaders that were brought together to have their leadership capacities enhanced, inspired and challenged by outstanding global leaders from different walks of life.

She noted that she felt “overdosed on inspiration, motivation and a passion to do great things”, having had the opportunity to be counselled by the likes of Former United Nations Secretary General, Kofi Anan; Winnie Mandela; Founder of the Huffington Post, Arianna Huffington; Musician, Sir Bob Geldof; Founder of the Virgin Group, Sir Richard Branson; Sportsmen, John Barnes and Ashwin Willemse; CEO of the Barclays Group, Antony Jenkins and astronaut, Ron Garan; just to name a few.

Boddie quipped that she was truly moved and inspired to contribute positively to the development of her country by the words of Kofi Anan, when he counselled, “There are no limits to what you can achieve. You have the power to change the world for the better. You are the smartest generation ever; so be the change you want to see.” Boddie also noted that she was further encouraged to be relentless in the pursuit of her goals, by Mr. Anan’s words of wisdom, when he highlighted that “Change is not an event, but a process.”

She noted that the highlight of her attendance at the Summit was when she had the distinct honor, to be introduced to the 1300 delegates by Mr. Antony Jenkins, and addressed the audience on the concerns surrounding Youth Unemployment in the Caribbean, thereby lending a different perspective to the discussion on Youth Unemployment worldwide, while at the same time building her self-confidence and public speaking skills. She added that another personal highlight of the Summit was when she was granted the privilege of moderating the Leadership and Government Break Out Group, which discussed the theme “Transparency and Accountability.”

Boddie also added that the One Young World Summit also provided a platform for her to not only be a “consumer of information”, but also, a “creator of information.” She provided interviews to various media houses and capitalized on the huge opportunity to educate people from every corner of the globe, about her beloved Federation of St. Kitts and Nevis, promoted the exciting tourism product that we offer and shared with them souvenirs, which were donated by the St. Kitts Tourism Authority, to whom she is extremely grateful.

She also praised the organizers for organizing tours which allowed her to get in touch with the South African cultural heritage, learn about the way of life of some indigenous groups, and also to come in close contact with some exotic animals such as the cheetah, giraffe and lion.

When asked what words of advice she would give to the young people of the Federation, Boddie remarked, “Do not bury your talents. You owe it to the world to create a ripple effect of that talent you have been given. Avail yourselves to be trained and to train others. Invest in your human capital, so that you are more prepared to make a significant contribution to your society, country and the world at large. You all have what it takes to be world changers and shapers, so let us take action now and do it together. As a popular African proverb states, ‘If you want to go fast, go alone; if you want to go far, go together.”

Boddie concluded by thanking the organizers of the Summit for providing her with sponsorship through the All Bar None initiative, which allowed delegates from countries that are not visible on the world stage to compete for sponsorship. She also expressed her profound gratitude to the government and people of the Federation, for their tremendous showing of support as she embarked on her journey to the Mother Continent. She highlighted that next year’s One Young Word Summit would be held in Dublin, Ireland, and that she is encouraging all youth to apply to gain an opportunity to be equally inspired and empowered by these life changing sessions.

Since her return she has engaged the Department of Youth to implement activities and lessons leant influenced by her participation at the Summit.

More information about the One Young World Summit can be found at www.oneyoungworld.com.