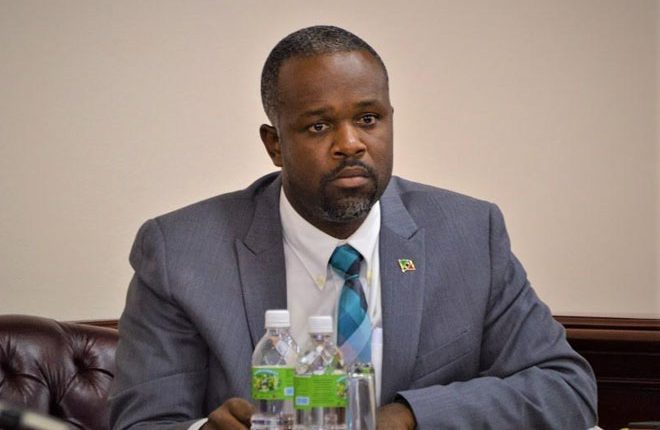 (SKNIS): The Sitting of the National Assembly on July 11 had gone on relatively smoothly but Member of Parliament (MP) for St. Christopher Three, the Honourable Konris Maynard, spoiled the day when he was called out, named and suspended from the hallowed chamber for gross disrespect and defiance to Speaker Honourable Michael Perkins. This is the second time that MP Maynard has been asked to take leave of the Parliament for gross disrespect to the Chair, the first being on May 23 of this year.

Members of the Opposition, including its leader, the Right Honourable Dr. Denzil Douglas, had vacated their seats for the latter part of the afternoon during the wrap up of the debates by Attorney General Honourable Vincent Byron on the Land Registry Bill, the Registration and Records (Amendment) Bill and Title by Registration Act (Amendment) Bill, but two of them returned for the adjournment of Parliament, namely, the Honourable Konris Maynard and Senator Honourable Nigel Carty.

MP Maynard interjected the adjournment speech of Prime Minister Dr. the Honourable Timothy Harris several times, and was asked to desist by Speaker Perkins, but he nevertheless defied the order of the Speaker.

“Honourable Member for Number Three, I believe you have come back to this House to create some disorder…that’s my view,” Speaker Perkins said. “I have just spoken to you. You are disregarding my instruction. You continue to speak and to accuse the Chair of allowing certain things to other members.”

MP Maynard, during his adjournment speech, accused the chair by saying “the Chair gives protection to Member for Number Seven”, who is the prime minister.

“Honourable Member, you clearly know the rules of the House or you should know the rules of the House. On adjournment as by custom, by tradition, on adjournment, we do just what you did previously—congratulatory messages, pleasantries, condolences, nothing controversial. You cannot use the adjournment to go back into today’s debate and raise issues. That is out of order. You indicated that you were referring to matters that were earlier spoken to. Please refrain from that,” Speaker Perkins told MP Maynard, who continued to defy his rulings.

Speaker Perkins then read the riot act to MP Maynard, who was eventually named under 49 (3) of the Standing Orders, which was moved by Leader of Government Business in the House.

Under Section 49 (1), I asked you to resume your seat just now…49 (2) gives me the right to find you to be out of order, grossly disorderly as a matter of fact and I’m going to find you to be in gross disorder right now because you’re being deliberate. I asked you to resume your seat and you continued to utter things and disrespect the Chair. I am going to have a member to stand and name you; I’m naming you now honourable member. Mr. Konris Maynard you are hereby named for gross disrespect to this Chair,” Speaker Perkins said.

Speaker Perkins then called on a member on the Government side to exercise the right of naming under Section 49 (3).

“Mr. Speaker, I rise to move the motion that the honourable member for number three be named,” Leader of Government Business in the House, the Honourable Eugene Hamilton said.

Speaker Perkins then proceeded to read sections of the Standing Orders.

“If the Speaker on any occasion finds that his or her powers under the previous provisions of this order is inadequate meaning 49 (1)…I found it to be adequate. I asked you to resume your seat, you did so, and under 49 (2) you showed gross disrespect, so I now move to 49 (3) and you are named. So now that you’re named and a minister has moved that you be suspended from the service of the National Assembly, I ask you to take leave of the National Assembly for the rest of the sitting…even though it may just last a few minutes longer, the records will reflect he’s named and he’s been asked to leave this Assembly immediately.

“Just for clarification and for the record, the naming of the member was triggered by his disrespect under 49 (3) and under 49 (4) a member was asked to move the motion that the member be suspended,” said Speaker Perkins.

In what seems to be a clear pattern of disrespect to the Chair, and concerted, calculated efforts to create disorder in the House, according to Speaker Perkins, several opposition members have been ejected. Senator Carty was booted twice out of Parliament, the first being on December 08, 2016, when according to the Speaker, the senator mockingly laughed at his ruling, and again on April 28, 2017, for gross disorder to the Chair—then followed the Leader of the Opposition’s eviction from the law-making body on January 20, 2017, the first Sitting of the Parliament for this year. Dr. Douglas continually interrupted Speaker Perkins, shouting at him in a loud voice while he was on his feet ruling on the Motion of No confidence filed against him by the Leader of the Opposition and announced at the last Sitting of Parliament in December of 2016.