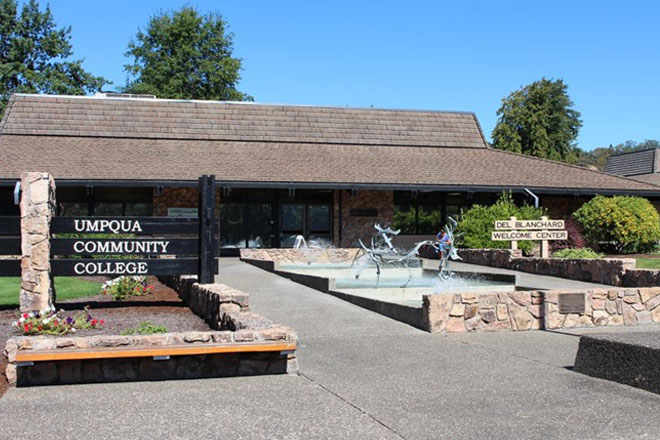 (CNN) — The picturesque campus of Umpqua Community College sits on a hill in the logging community of Roseburg, Oregon, some 180 miles south of Portland.

But the school, which prides itself on its website for providing “a peaceful, safe atmosphere,” was transformed Thursday by a deadly shooting, authorities said.

The massacre on the Umpqua campus Thursday left nine people dead and seven wounded. The gunman also died, although it’s unclear whether he was shot by police or committed suicide.

A triage station was set up for the wounded. Helicopters hovered over the normally serene campus. Sirens blared as law enforcement officers flooded the area.

Anxious students turned to social media and text messages for information. Some dashed to nearby businesses, yelling frantically, “There’s a shooter!”

“This is not what you’d expect in Roseburg,” said Paula Caudill, who handles sales and marketing at Abacela winery, which works closely with the college.

“Everybody knows everybody here. What’s so heartbreaking is that even if you don’t know someone directly affected by this, you know someone who was.”

Caudill was taking inventory with a winemaker when they learned of the shootings. The winemaker texted his wife, a college student who was in an administrative building at the time of the carnage. She was fine, Caudill said.

“This is so out of character for this whole area,” said Rick Francona, a CNN military analyst who lives in the area.

Roseburg, which has about 22,000 residents, is about 70 miles south of Eugene.

“It’s a beautiful place to live, with valleys and rolling hills and the Umpqua River, where there is a lot of fly fishing,” Caudill said. “The warm climate is more like Northern California than Oregon.”

Earl Jones, who has owned the winery for 20 years, said he was on the campus with his wife about 30 minutes before the shooting. The couple was introducing an intern from Spain to professors in the college’s winery program. Jones said the shooting occurred in the science building, about 200 yards from from where he had visited.

Caudill said the timber industry started to fall off because of the protective status of the spotted owl. Many newcomers arrived to participate in the burgeoning wine industry and attend the college for its winery program. Other employers include banks, hospitals and small businesses.

It’s a place better known for campgrounds and picnicking, for swimming and hiking, than violence and crime.

“It is a fairly peaceful community, very friendly,” Douglas County Sheriff John Hanlin said. “We have our share of crime like any small community. But certainly this is a huge shock to the entire community to have this level of crime … occur in our college.”

Said Jones, “Anytime there’s an event of this nature in a community it’s devastating psychologically. This is, too. Our community will be devastated until we understand what happened and why.”