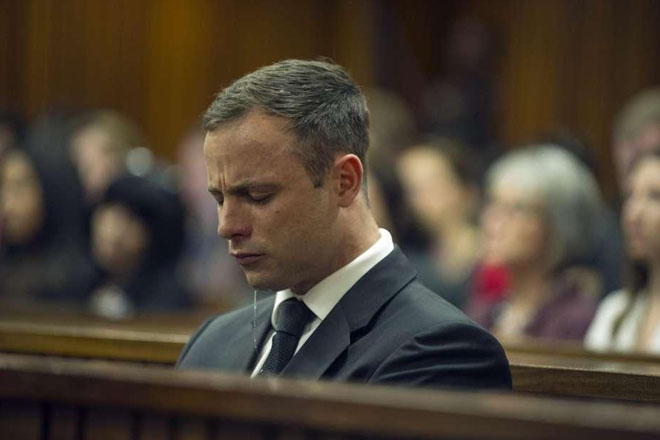 He is currently under house arrest after spending one year of his original five-year sentence in jail.

Pistorius will have to return to court to be re-sentenced, for murder.

It was earlier incorrectly reported that the court had ruled the manslaughter verdict would remain.

South Africa’s Supreme Court of Appeal ruled that the lower court did not correctly apply the rule of dolus eventualis – whether Pistorius knew that a death would be a likely result of his actions.

The minimum sentence for murder in South Africa is 15 years, but judges can apply some discretion.

South African law does not make provision for someone to be placed under house arrest for more than five years, so Pistorius will be going back to prison, reports the BBC’s Pumza Fihlani in Johannesburg.

Will he return to jail?

Yes. He will be back behind bars, less than two months after he was placed under house arrest.

When will he be sentenced?

We don’t have a date yet, but it will be next year. The minimum sentence for murder is 15 years, but the judge does have the discretion to lower it.

Yes, but only if his lawyers are convinced that the appeal judges violated his constitutional rights. So it’s a high threshold, and hard to meet.

So is this the end of Pistorius’ professional athletics career?

Almost certainly. He’s 29, and will be past his prime by the time he is freed. It is also unlikely that advertisers would want to sponsor him, as the Pistorius brand is now tainted.

Pistorius’ family gave a brief response, saying lawyers are studying the finding who will advise them on “options going forward”.

The panel of appeal judges described the case as “a human tragedy of Shakespearean proportions” in their written judgement.

Reading the unanimous ruling reached by the five judges, Justice Eric Leach said that having armed himself with a high-calibre weapon, Pistorius must have foreseen that whoever was behind the door might die, especially given his firearms training.

“As a matter of common sense at the time the fatal shots were fired, the possibility of the death of the person behind the door was clearly an obvious result,” the judge said.

“And in firing not one but four shots, such a result became even more likely.”

Pistorius always maintained that he believed there was an intruder in the house but the judge said that the identity of the person behind the door was “irrelevant to his guilt”.

Justice Leach compared it to someone setting off a bomb in a public place not knowing who the victims might be.

In a packed courtroom with Reeva Steenkamp’s family listening to every word, the judge said that when Oscar Pistorius decided to fire four shots through a closed toilet door, he had gambled with a person’s life – whoever that was.

Under South African law you cannot just shoot – you first need to determine that the threat to your life is real and that there is no other way to eliminate that threat but to shoot.

Many South Africans have applauded the court’s decision on social media, saying justice has now been served for Ms Steenkamp.

This ruling is expected to go some way to show that no-one is above the law, not even South Africa’s once beloved “blade runner”.

The judge also rejected the argument that Pistorius had acted in self-defence.

He said that the athlete’s life was not in danger at the time of the shooting, as Pistorius did not know who was behind the door or if they posed a threat.

The judge added that Pistorius did “not take that most elementary precaution of firing a warning shot”.

Pistorius did not attend the hearing in Bloemfontein.

But Ms Steenkamp’s mother, June, was present and afterwards she was seen outside the court being embraced by members of the African National Congress Women’s League, who were singing songs of celebration.

Our correspondent says that many in South Africa were upset by the original acquittal on murder charges, with women’s rights groups arguing he should have been found guilty of murder as a deterrent because of the high number of women who are killed by their partners in the country.

The double amputee was released from prison on 19 October as he was eligible for release under “correctional supervision”, having served a sixth of his sentence.

Legal expert Mannie Witz told the BBC that there do not appear to be any grounds for such an appeal.