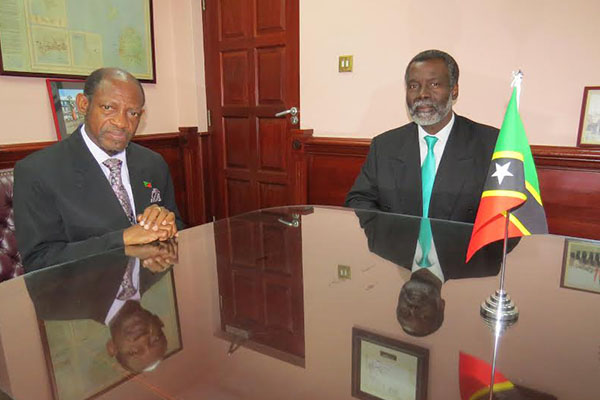 Basseterre, St. Kitts (CUOPM) – The Government of St. Kitts and Nevis is hailing the contribution to the twin-island Federation by outgoing Director of the Organisation of American States (OAS), Mr. Starret Greene.

The sentiment of the Government was expressed by Prime Minister the Right Hon. Dr. Denzil L. Douglas, when Mr. Greene paid his official farewell visit.

Prime Minister Douglas placed on record his Government’s profound appreciation to Mr. Greene for the high level of professional and productive service that he has given during his tenure in the Federation.

“Your performance for the duration of the years that you have served here has been exceptional and the Federation has benefited tremendously from your commitment to service and your clear understanding of your role as representative of this hemispheric organization. Indeed you have pioneered several initiatives that will redound to the benefit of our nation as we reflect on the impact of your contribution to the development of specific sectors of national significance and the advancement of our foreign policy priorities with the Organization of American States as a whole,” said Prime Minister Douglas.

“As you take up your new assignment, there is no doubt that you will maintain the same excellent working relations that existed between the respective Government officials from the institutions and Departments with which you collaborate during your tenure,” said Dr. Douglas, who used the opportunity to extend best wishes and success to Mr. Greene in his new assignment.

Prime Minister Douglas said he anticipates the same level of cooperation from Mr. Greene’s successor when he assumes duties in the coming month.

Mr. Greene’s eight and a half years of service to St. Kitts and Nevis end on June 30th 2014 and he takes up his new assignment in Belize on July 1st 2014.

He expressed thanks and appreciation to Prime Minister Douglas, Cabinet ministers and officials for the cooperation and support during his assignment.