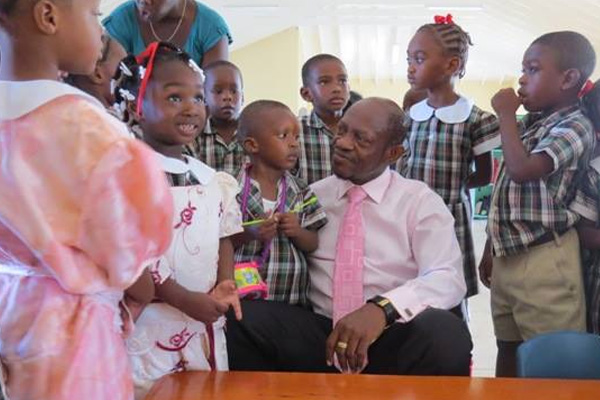 Basseterre, St. Kitts (CUOPM) — It was business as usual for St. Kitts and Nevis’ Prime Minister the Right Hon. Dr. Denzil L. Douglas as he celebrated another milestone on Wednesday 14th January.

After a pre-birthday bash Monday night and another Tuesday evening, attended by hundreds and which ended in the wee hours of Wednesday, Prime Minister Douglas visited the St. Paul’s Primary School and the St. Paul’s Day Care in his constituency in the morning where the children sang the “Happy Birthday” song and wished him the best of health and many, many more years

Hosting his weekly radio call-in programme, “Ask the Prime Minister” on ZIZ Radio and carried live by Kyss FM and Choice FM and carried broadcast later on Freedom FM, several persons congratulated the St. Kitts and Nevis leader, whose St. Kitts-Nevis Labour Party won 60 percent of the popular vote on St. Kitts in January 2010 and wished him the best of health, happiness and continued vision in administering the twin-island Federation.

Among the visitors were popular calypsonian Turkey Killer and Linditta Trotman, who travelled with the Prime Minister to joined him and several others at a birthday lunch.