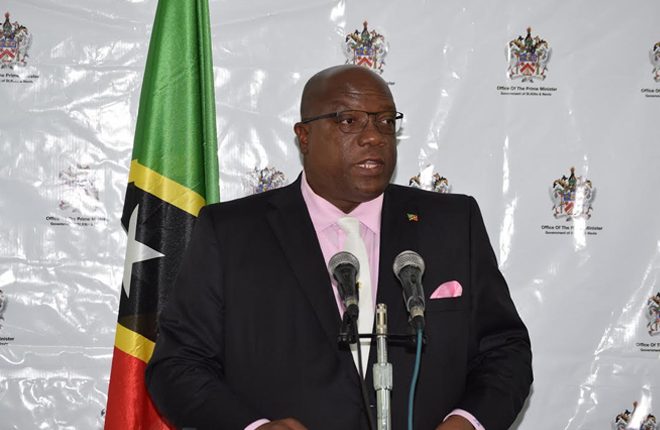 (SKNIS): Prime Minister, Dr. the Honourable Timothy Harris, said during his monthly press conference on February 01 that to date $13,050,508.00 have been paid out to 2003 former St. Kitts Sugar Manufacturing Corporation (SSMC) workers.

The prime minister said that many lives have been touched so far from the Sugar Workers Restoration Fund (SWRF), which was designed to provide gratuitous payments to the former sugar workers.

“Imagine how many families have been touched,” said the prime minister. “One policy decision directly impacted 2003 in contrast to the pay-out in 2005 when a mere 968 persons received sums. Two thousand and three versus 968. You do the math and you will see who has done more and who has touched more households and more families.”

In March 2015, the government recieved a $16 million grant from the Bolivarian Republic of Venezuela under the PetroCaribe Agreement to pay former sugar workers.

Prime Minister Dr. the Honourable Timothy Harris, speaking at the Sugar Workers Restoration Fund (SWRF) Distribution of Cheques Ceremony in September 2015, said it was “right and proper that these persons, who toiled in some of the harshest working conditions to secure a future for themselves, their children and grandchildren, are now getting their just recognition and reward for supporting their families, putting a roof over their heads, clothing and feeding them, sending their children to school and ensuring their health and safety.”

The prime minister said, at the event, that this was indeed justice for the former sugar workers.

“It is right and proper that we bring restorative justice to these unsung heroes who broke their backs and braved sweltering heat in the midday sun to ensure this country earned well needed foreign exchange to provide jobs in other industries and such sectors as national security, healthcare, education and other social services in order to secure a dignified existence for our people,” he said.

When the sugar industry closed in July 2005, $44 million in severance payments was promised to former sugar workers, however, only $28 million was paid, said the prime minister.

The $16-million-dollar grant from Venezuela was to pay the shortfall in the package paid to the former sugar workers. The cheque presentation ceremony was held on March 30th, 2015, at Government Headquarters, where Prime Minister Harris and Venezuelan Ambassador, His Excellency Bernardo Álvarez Herrera, signed an agreement.

On May 18, 2015, the Secretariat of the Sugar Workers’ Restoration Fund officially opened in the CLICO Building at South Independence Square Street, to process claims and distribute payment to former sugar workers.