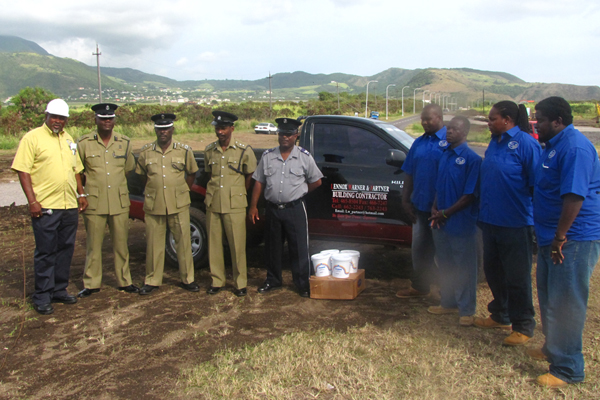 Paint donated to the Police

(ZIZ) On Tuesday 8th October 2013 about 8:30 am at Kim Collins High Way, a local businessman held a brief Handing Over Ceremony of thirty (30) gallons of paint which he donated to The Royal St. Christopher and Nevis Police Force.

Lennox Warner and Partner Building Contractors has demonstrated that him and his partner are among the many individuals and business persons who are willing to assist the Royal St. Christopher and Nevis Police Force in its fight against crime. The paint were donated to Division “B” of the Royal St. Christopher and Nevis Police Force to assist in the traffic aspect of police work. This handing over ceremony marked a memorable occasion for Mr. Warner; the anniversary of the death of his son in a road traffic accident three (3) years ago.

Superintendent Terrence James, Officer in charge of Divisional B expressed his appreciation for delightful donation of twenty gallons of white paint and ten gallons of yellow paint, and pledged that the said paint would be utilize to mark the roads in Sandy Point District.

Mr. Lennox Warner stated that he looks forward to having a long working relationship with the Royal St. Christopher and Nevis Police Force and didn’t hesitate to donate when requested to assist the Force in its endeavour to fight crime. Mr. Warner choose this day for the donation because this day is symbolic to him. This date marked the 3rd anniversary of the fatal accident that took the life of his son, Maurice Rawlins and three (3) other young men in the vicinity of Brimstone Hill. In memory of late Maurice Rawlins, Dexter James, Lacento Bradshaw and Damien Harris, Mr Warner contributed thirty (30) gallons of paint to mark the roads in Division “B” in an effort to enhance road safety for motorists and decrease number of accidents in the Federation.

Assistant Commissioner of Police, Mr. Dolphin, on behalf of the Commissioner Walwyn thanked Mr. Warner for his generous donation. He told Mr. Warner that the donation is seen as a kind gesture of timely purpose, hence marking the road would assist in reducing road congestion of heavy traffic and decrease the number of traffic accidents. He also stated that marking the roads in District B would make travelling more friendly and safe.