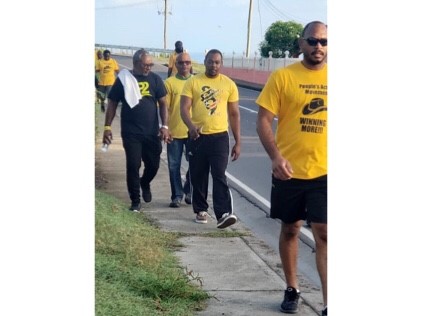 At the end of the walk, Deputy Prime Minister and Leader of the People’s Action Movement, Hon. Shawn Richards said the walk is an initiative that helps to bring people together.

Party Chairman, Hon. Jonel Powell said one highlight of the walk was seeing the first Prime Minister of St. Kitts and Nevis participating in the event.

Meanwhile, former leader of PAM Sir Kennedy Alphonse Simmonds explained how the walk which began under his tenure as Prime Minister came about.

He told ZIZ that although he had not been to the annual walk for a quite a number of years, he wanted to be present to honour one of the founders of the party, Mr Richards Caines CSM JP who passed on July 27 2020.

PAM’s Deputy Leaders, Hon. Lindsay Grant and Hon. Eugene Hamilton were also present at the walk. Ambassador Ian Liburd, all executive members along with supporters of the People’s Action Movement and health enthusiasts from the various constituencies also participated in the walk.

The PAM Independence Charity walk began in 1983 following the achievement of Independence for St. Christopher and Nevis.