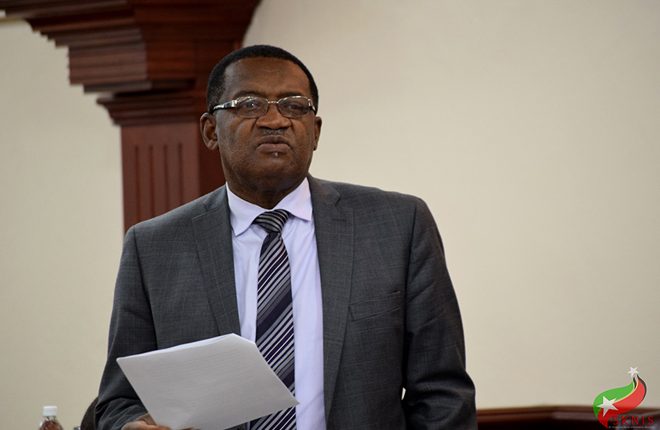 (Press Unit in the Office of the Prime Minister) – Duly elected and appointed Members of the National Assembly maintain their resistance to Leader of the Opposition, Dr. Denzil Douglas, continuing to serve as a representative in the Federal Parliament while having a Diplomatic Passport of the Commonwealth of Dominica.

During the Tuesday, 14th November 2017 sitting of the National Assembly, Member for St. Christopher 8, the Honourable Eugene Hamilton, as well as Attorney General the Honourable Vincent Byron Jr. said they are uncomfortable sitting in the Parliament with anyone who is in a position to be disqualified from the Honourable House.

The Honourable Eugene Hamilton, in his capacity as Leader of Government Business, formally brought the matter to the attention of the Speaker of the House of Assembly, the Honourable A. Michael Perkins, by way of a letter dated 23rd October 2017.

Addressing the National Assembly, Minister Hamilton stated, “There’s every good reason for any constituent and citizen, and every good reason for the Office of the Attorney General to institute proceedings against Dr. Douglas, and I would expect no less as I am uncomfortable with having him – or anyone for that matter – sitting in this Parliament in violation of our Constitution.”

Senator the Honourable Vincent Byron Jr. echoed similar sentiments to those expressed by Minister Hamilton. The Attorney General noted, “This Government is deeply concerned that we should have someone who sits in our Parliament who is in a position to be disqualified.”

As such, Minister Byron, in his capacity as Attorney General, said the Government has sought legal advice and has “begun proceedings to go to the Court under Section 36 of the Constitution.”

Section 36 (1) (a) of the Constitution of St. Christopher and Nevis, which looks at Determination of questions of membership, states that, “The High Court shall have jurisdiction to hear and determine any question whether (a) any person has been validly elected as a Representative.”

The Honourable Eugene Hamilton said this matter of the Opposition Leader being the holder of a Dominican Diplomatic Passport resonates with him personally, particularly as it was the Denzil Douglas regime that initiated court actions against him to challenge the validity of his 2010 election victory, over his possession of a United States green card.

Given its serious implications, the Honourable Speaker of the House informed the National Assembly that he has sought “proper advice” on the matter.

Prime Minister Dr. the Honourable Timothy Harris made the startling revelation to the nation during his October 3rd 2017 press conference that Dr. Douglas held, and has travelled on a diplomatic passport issued by the Commonwealth of Dominica on July 30th, 2015. That diplomatic passport, which bears the number DP0000462, also lists Dr. Douglas’ nationality as Dominican.